By News Staff on January 3, 2014 in Government Agencies/Utilities 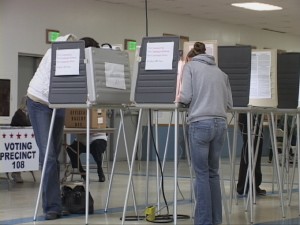 In the June Primary Election, Eastern Sierra voters can choose members of the Boards of Supervisors, Mammoth Town Council members and other elected officials.

Before the new year, Clerks in both Inyo and Mono Counties let citizens know petitions for signatures in lieu of filing fees were ready to pick up. Some officials acted immediately. In Mono County, appointed Sheriff Ralph Obenberger took out papers for his election. Two people took out petitions to run for Assessor in Mono County – current Assessor Bob Musil and candidate Barry Beck. The seats of Supervisors Larry Johnston in District 1 and Supervisor Byng Hunt in District 5 are also up for election. These districts are part of Mammoth Lakes.

Also, at last word in Inyo County, Auditor-Controller Amy Shepherd took out papers to run and so did County Clerk Kammi Foote, District Attorney Tom Hardy, Public Administrator Patricia Barton, Sheriff Bill Lutze, and Treasurer-Tax Collector Alicia McMurtrie. At last report, they had no challengers. Seats for Areas 1, 2, and 3 on the Inyo County Board of Education are also up for election.

Declaration of Candidacy forms and Nomination papers can be filed with County Clerks beginning on February 10th through March 7th. Contact Clerks’ offices in Bridgeport and Independence.

As for the Mammoth Town Council race, the seats of Matthew Lehman, John Eastman, and Rick Wood are up for election in June. According to Town Clerk Jamie Gray, paperwork to run for those seats becomes available at the Town of Mammoth Clerk’s Office February 10th.

Wow, Bishop City Council Member, Dave Stottlemyre, has taken out petitions to become the Inyo County Assessor? That’s weird considering he is the main member of the Council pushing the City Police Department be absorbed by the Sheriff’s Department. Obviously he does not have that much interest for the “city… Read more »

Brett, I don’t know much about Mr. Stottlemyre, but I would like to know why he supports using the Sheriff’s dept.?