At the Mammoth Lakes Biathlon, a show of amazing marksmanship and skiing captured media attention, the TV channel 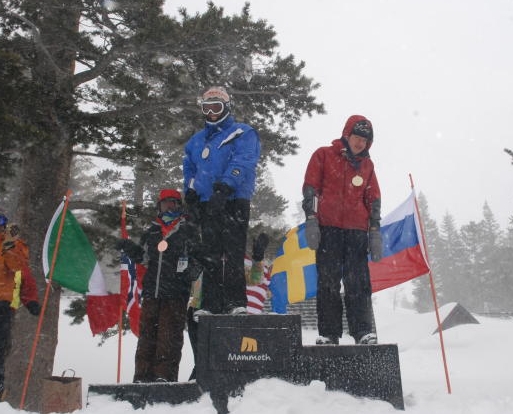 Versus and admiration around the world. A lesser known but heart-warming story unfolded at the Biathlon in the Disabled competition.

The twin sons of Grace and Marshall Rudolph, who is also the Mono County Counsel, captured gold and silver medals and lots of pride. The 17-year-old boys, Emory and Joseph Rudolph, were diagnosed with autism as young children. Grace said the family moved to Mammoth when the boys were 2. The family quickly learned that skiing helped the boys with their disability.

Before Disabled Sports Eastern Sierra, the twins went to Mammoth Ski School. Joseph took to downhill skiing while Emory preferred the less populated cross country ski path. Grace said when he was about 9, Emory started to ski with Nancy Fiddler’s Tamarack Gliders program along with cross-country ski PE through the elementary school. Emory then learned to skate ski when he was 14.

At the same time, Joseph took part in downhill ski PE and ultimately started to ski with Disabled Sports. Their mother says through the years both boys grew into strong downhill and cross-country skiers. “One thing is they both have excellent balance,” said Mrs. Rudolph. “Joseph is very cautious and loves downhill. He’s a classic skier. Emory prefers skate skiing.”

Their mother believes skiing has helped the autistic boys to grow and develop. Many, along the way, helped the twins to learn physical skills. “It’s the same as autistic surfers. When they’re skiing, they’re focused.” She said all of the years of training and all of the people who have helped converged at the biathlon where founder Mike Karch made room for disabled competition and Disabled Sports included Emory and Joseph.

Mrs. Rudolph said, “On race day the boys raced with the Wounded Warriors, and in their heat they placed 3rd and 4th behind two Wounded Warriors. Joseph skied with DSES volunteer, Dorie and Emory skied with DSES volunteer, Sue Mehrhof.” The boys received medals in the Disabled category – Emory won a gold medal and Joseph a silver medal. The third person on the podium was Tyler Stern. Grace Rudolph called this moment a “culmination of a community through the years saying “yes” and taking a risk on Joseph and Emory.”

We work to provide daily news to all of the Eastern Sierra, in the tradition of Eastern Sierra News Service and the Sierra Wave. We bring you daily happenings, local politics, crime, government dealings and fun stuff. Please contact us.
View all posts by News Staff →
Bureaucrat Beat: Crystal balls, Legislative therapy and another Wonder Woman
Inyo-Mono Supervisors: Fireworks, state budget, firearms