From CAL FIRE: Credential verification for Repopulation of Paradise & Swall Meadows residents will begin at 4 p.m. We will let residents of both communites; however, Paradise will not have power until around 9pm

Horrible tragedy in the Eastern Sierra: The Round Fire claimed 40 homes – 39 in Swall Meadows and one in Paradise – and

residents were only being allowed back into the devastated areas today. 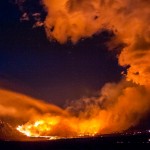 power as of 1 pm today – CAL FIRE said the goal was to get re-entry for residents of Paradise by 4 pm, followed by Swall Meadows.

The Round Fire began at 2:07 pm Friday, and another fire, the Van Dyke Fire near Bridgeport, also erupted on Friday. The blazes
closed US 395 and have disrupted Verizon cell service in the Eastern Sierra.

As of this morning, the Round Fire was still being reported at 7,000 acres – or about 11 square miles – with 85 percent containment.
The cause of the fire is under investigation. 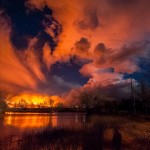 Over 250 personnel were still working the fire area today, with 20 fire engines, 14 hand crews, four bulldozers, two water tenders and
one helicoper. Four firefighters have suffered injuries; there has been no loss of life to date recorded/reported per Mono County
Sheriff/Coroner Ingrid Braun.

CAL FIRE spokeswoman Capt. Liz Brown reported dozens of power poles were down in Swall Meadows and Paradise, creating
hazards for about 250 residents who have been evacuated. Propane tanks were also venting, making re-entry for residents into the
area dangerous.

CAL FIRE reports people may see smoking debris on hillsides but it does not pose a threat to residents and structures.

An evacuation center was set up at the Crowley Lake Community Center.

As always, Eastern Sierra residents quickly came together to help their friends, neighbors and those they may not know but may be in
need.

St. Timothy’s Attic Thrift Store invites all persons, with ID, who lost their home and possessions in the “Round Fire” to take any items
they need from our store. .Our store hours are Monday, 12 to 4, Tuesdays through Friday, 10 to 4 and Saturdays, 11 to 2.Our phone
number is:760-873-8974. “We are located in Bishop at 140 Whitney Alley. We are here to help. God Bless You.”

Donations to the Bishop Rotary Foundation Fire Victims fund are tax deductible. To send in a contribution, be sure to indicate on the
check that it is for the Round Fire Victims Fund and mail it to:

The Cast Off in Mammoth Lakes is accepting donations for Fire Victims.

Also accepting donations over the weekend: the Tri-County Fairgrounds, Bishop Area Chamber of Commerce and Visitors Bureau, the Red Cross and the Salvation Army – as well as AltaOne Federal Credit Union, and Bishop Veterinary Hospital is offering free boarding for animals.

On Friday afternoon, about two hours after the Round Fire began, winds were whipping through the Round Valley area between 20
and 30 miles per hour, with gusts estimated by CAL FIRE at 70 miles per hour.

But when the sun went down, the winds kicked up even more to 50 to 75 miles per hour, and the blaze grew from a reported 100
acres to 3,000 acres quickly.

And Friday was another record-setting temperature day for Bishop – 80 degrees, beating the previous record for Feb. 6 (1951) by eight degrees – and by Saturday the Round Fire had grown to 7,000 acres.

Travelers on US 395 between Bishop and Mammoth saw an eerie if spectacular sight Friday night along Sherwin Grade as the
flames barged up Wheeler Crest.

Rain began fall after midnight and that helped firefighters put out hot spots and start to get some control over the raging Round Fire.

The extent of the damage – with, again, 40 homes as well as five structures damaged, made not only the national news but international news as foreign papers picked up the sad story of residences burned and lives forever changed for people in Swall Meadows and Paradise.

i don’t usually post LMAO! Lari just set the record straight! Hehe! We all know who the drunken neighbor in Round Valley is now don’t we! LOL that is too too funny.

Not exactly sure where you are getting that I set any record straight? ovlove asked the question of where I was at during the fire and I responded. Simple as that. I agree, hugs to all of the families that have suffered through this devastation.

settle down lari. you told me i should get my facts straight. i was confirming and will say one more time.. the only fact that i have stated is that browns delivered a bin. oh and i did see smoke at lunch time. but thats it, the only facts i… Read more »

I just want to say…I watched the news clip reporting the fire on the internet. Mickey Jarvis was reporting live via telephone. Mr. Jarvis refered to the fire as “devistating” and “them poor people” He went on further, saying “we lost a truck” and “burned up all our fences.” When… Read more »

hate to say it Allen, but you are way off base. Jarvis is nothin but a ranch hand.

Mick Jarvis is a ranch hand.

After the Northridge Earthquake there were many folks who were assisted in filing their insurance claims by a grass roots organization called United Policy Holders . A former Insurance claims adjuster , Ina DeLong came down from the Bay area where she had assisted folks in the Berkley/Oakland. The methodology… Read more »

PLEASE…realtors/property managers, DON’t raise rents to take advantage of the sudden surge in demand for rental units. 40 families needing homes in an area with maybe 5-10 houses available for rent within the entire Mammoth/Bishop area and parts in between, creates an opportunity for unscrupulous, greedy people to add to… Read more »

Nice sentiments — but being socially conscious is not a business plan.

Treating people honestly and fairly is ALWAYS a good business plan. This is small town America. Taking advantage of someone in their time of need would definitely lead to reputation that would hard to shake. Conversely, do right by people now and the community members will remember that when they’re… Read more »

If what you say is true — why did sugarmagnolia have to ask?

Why?
I guess cuz there are few out there who aren’t aware that taking advantage of people isn’t in their own best interest in the long run. Word travels fast in small communities – both good and bad. And it’s very difficult to out-run your reputation once you’ve destroyed it.

Who would thumbs-down this? Fascinating…

My experience with local people has been entirely positive, and we’re very grateful for the unselfish reactions we’ve experienced. Looking for greed and negativity sometimes predisposes people to find it.

Thank you, Sierra Wave, for reporting through the weekend on this local tragedy. Your updates helped those of us who wish to help, and pray, for our neighbors. Great work!

High five to all the fire, law enforcement and others who dealt with this incident under extremely difficult conditions. Another high five to all the residents, businesses and organizations that stepped up to help those who were displaced by this fire. My heart goes out to all those who’ve lost… Read more »

Browns Supply Inc. recently delivered a scrap bin to the ranch where the fire started. The fire could have been started while cutting scrap in the wind? just a thought

You really need to get your facts straight before you start slandering people! Get a life!

Lari- Maybe you should sober up and read the post again. Exactly what “facts” are you referring to? The only fact that I have stated is that Brown’s delivered a scrap bin. This is a fact and can be verified. As for the rest of the comment…..the word perhaps clearly… Read more »

Excuse me? Now you are trying to blame me for this fire? Like I said get your facts straight before you start throwing accusations around. Not that I have to answer to you but I was working, along with my husband, in Bishop not at Round Valley…something you obviously were… Read more »

Lari- Why all the hate and anger. I think you are taking things a bit personal, and in my opinion, you are awfully defensive and jumping to conclusions. The cause of the fire is under investigation, meaning it is critical to collect any and all info in order to confirm… Read more »