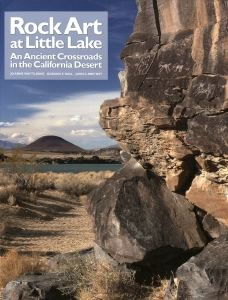 Archaeologist Jo Anne Van Tilburg will be discussing the recently released book, “Rock Art at Little Lake: An Ancient Crossroads in the California Desert,” at the Eastern California Museum on Saturday April 20, starting at 4 p.m.

The meticulously researched book is an outstanding scholarly work that also contains extensive sections and discussions that are quite informative and accessible to a general audience. It is sure to be greatly appreciated by serious students or enthusiasts of rock art, especially in the Owens Valley and Coso Range. Those wishing to know more about the area’s rock art, and the topic in general, will also find the explanations, definitions, drawings and other aspects of the book quite useful and interesting, if not fascinating.

“Rock Art at Little Lake” uses dozens of color photos, about 100 precise drawings and 84 charts and graphs as aids to the discussion and analyses of more than 4,000 examples of rock art documented at the Little Lake site, which is located on private land south of Olancha, in Inyo County.

The exhaustively researched book is the result of 10 years of field work by the UCLA Rock Art Archive at the Cotsen Institute of Archaeology. Van Tilburg, the director of the archive, co-wrote the book with Gorden E. Hull and John C. Bretney. She will make a presentation, take questions and sign copies of the book on Saturday, at the Museum, which is located at 155 N. Grant St. in Independence; call 760-878-0258 for more information.

One description of the book notes, “Rock Art at Little Lake breaks out of the moribund conversations about shamanism as the primary motive for rock art exploration to explore new issues, including ethnic identity, leadership, craft production, and wealth transmission by the Native peoples that hunted and gathered along the shores of Little Lake. It is a valuable contribution to rock art studies that deepens our understanding of one of California’s most impressive sacred landscapes.”

Detailed explanations and drawings of the many rock art “motifs” at Little Lake provide an overview of the kinds and types of rock art found at the site. There are also photographs and diagrams of the sites many rock art “panels.”

The Little Lake site’s extensive rock art is also broken down into several more specific types and sections. For example, the book contains a chapter on Atlatl Cliff, and an analysis of the atlatl rock art motif. Some of the region’s most recognizable rock art depicts Desert Bighorn Sheep, and Little Lake is no exception. The site’s many depictions of the trademark desert animal are fully explored. Scratched rock art, and painted rock art at the site are also thoroughly examined.

In the chapter on Rock Art, Aesthetics, and Belief, Van Tilburg places the “art” in a larger context. “We regard Little Lake Ranch rock art not as art per se but, instead, as a ‘cultural form’ best understood within a dynamic social context,” she writes. She then discusses various aspects of the area’s Native culture, spirituality and beliefs, an overview which incudes the Owens Valley Paiute and Panamint Shoshone groups, as well as others.

A more general discussion of the history of the Little Lake Ranch, and its role in preserving the extraordinary rock art on the land, is penned by present co-owner Jim Pearson. Another section discusses Paiute and Panamint Shoshone basketry from the Little Lake area, and compares some design elements to rock art motifs.

Writing in the book’s Forward, Charles S. Stanish states, Van Tilburg and her fellow authors have created “an interdisciplinary collaboration worthy of the challenges inherent in the complex Little Lake Ranch site. The result is a … probing analysis of ethnic identity, social significance, and meaning embedded in Little Lake rock art.”