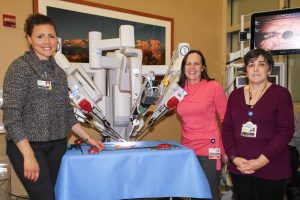 When all was said and done, the new da Vinci system had won local critical acclaim.

The da Vinci system translates a surgeon’s hand movements into smaller, precise movements of tiny instruments inside a patient’s body. One of the instruments is a thin tube with a tiny camera and light at the end. The camera sends high-definition, three-dimensional images to a video monitor in the operating room to guide the surgeons during surgery.

The surgeon, who remains in the surgery room with the patient and surgical nurses, is in control of the system at all times. If the surgeon makes a sudden jerk of her hand due to a sneeze or sudden tremor, the system freezes the controls and only releases them when the surgeon is ready.

To date, there have been 15 robot-assisted surgeries completed at NIHD.

Those in attendance were put in the surgeon’s seat and allowed to “operate.” In this demonstration operating meant using the small instruments to peel and re-attach the skin of a grape, stitch up a practice mat and pick up small coins. They ran the system through its paces, testing the system’s safety mechanisms by faking sneezes and shaking their hands.

“Robotics is approved for all the same procedures as laparoscopy,” Dr. Robinson explained. “It allows us to do more complex procedures with greater precision, great visualization, and better tissue handling, but it’s all about the value to the patient. We wouldn’t be doing this if it did not mean better patient outcomes.”

Dr. Jeanine Arndal, one of NIHD’s gynecological surgeons, praised the training provided to the surgeons.

“You can simulate a procedure 10-15 times before you do the surgery,” she said. “This is how we train pilots now. It’s how we do a lot of things to look for unusual circumstances and be mentally and physically ready for the time it would take for the things that may come up and occur. The stresses are even simulated. I don’t have to do 20 cases to be comparable in skill. I did not have this much training before my first-ever surgery.”

Surgery nurses Nita Eddy and Kristen Dorough said the training provided to the nursing staff by NIHD and the da Vinci system creator, Intuitive Surgical, was outstanding. “We are well prepared for this,” Eddy said. “We’ve done hours and hours of training modules and then had the chance to travel to Reno’s Renown Hospital and see the da Vinci surgical procedures first-hand.”

“That was encouraging and motivating to see,” added Dorough. “It’s what got me on board with bringing the da Vinci system here.”

So, what would they tell their neighbors about this new technology? “Stay here. We’ll take very good care of you,” Dorough said.

For NIHD’s Chief Executive Officer, Kevin S. Flanigan, MD MBA, the addition of the system opens the door for recruitment of a specific specialist.

“This addition does open the door for us to try and bring in a Urologist, a much-needed specialty here,” Dr. Flanigan said. “Before we had the da Vinci system we could not get one candidate to tour our community. Last week, we had two candidates on campus.”

Robotic surgery is pretty amazing. It’s crazy that the robots can actually perform surgery with greater precision than the doctors can. I think it’d be cool to be operated on by a robot.

This is totally unnecessary for a small-town hospital facility, and just drives health care costs up for the average local. What we need is quality, basic health care that’s AFFORDABLE. Patients in need of specialized tech toys can be transported to other facilities that specialize in this sort of thing.

Cool. There’s no reason the best surgeon in the world could not sit in his or her office in San Francisco ( or anywhere in the world) and perform operations in little old Bishop with a monitor and the robot.