A man of renowned social conscience, an All-American football star and an actor and singer extraordinaire – Paul Robeson 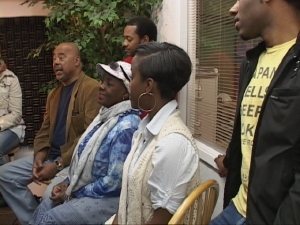 inspired the creation of the Robey Theatre Company in Los Angeles. Robey was Robeson’s athletic nickname. Actors Danny Glover and Ben Guillory formed the theater company in 1994 to, as Guillory said, reflect our relationships as human beings. The Robey Theatre Company actors and Guillory as Producing Artistic Director travelled to the Eastern Sierra for a performance of the play, “Bronzeville”.

Originally performed in Los Angeles, “Bronzeville” tells the story of Japanese-Americans imprisoned at Manzanar south of Independence and how vacant houses in Little Tokyo in Los Angeles became home to blacks in search of jobs and an escape from the South. In a twist of fate, a young Japanese-American hid out in the attic of a house where a black family moves in. The mystery unfolds.

Why go to “Bronzeville”? Good theater, said Guillory. “Great theater,” he said. “Social consciousness drives theater, but it has to be high and worthy theater. It’s not a soap box spouting. We’re a theater first. Consciousness is a big part of that, but it’s substantive art.”

How do people feel when they leave the play? “Enlightened, I think,” said the director. “And, in some cases very angry and very frustrated and…active.” Guillory added, “A certain awareness is taken away and that’s really all we can ask for.”

A unique opportunity to see a Los Angeles theater group perform in a specially designed set at the Manzanar National Historic Site south of Independence. The preview night is Thursday with opening night Friday. Show times are 7pm Thursday, Friday and Saturday, plus Sunday at 3pm, with special student matinees Friday and Monday at 11am.

We work to provide daily news to all of the Eastern Sierra, in the tradition of Eastern Sierra News Service and the Sierra Wave. We bring you daily happenings, local politics, crime, government dealings and fun stuff. Please contact us.
View all posts by News Staff →
DWP will open Klondike Lake seven days per week
Mule Days will proceed in spite of horse virus in western U.S.