By News Staff on November 11, 2020 in News Releases, Obituaries 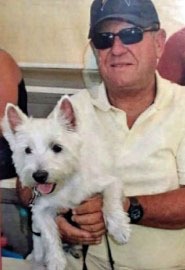 Bob was preceded in death by his parents. Bob is survived by his wife, Margie of Big Pine. Son, Kenny of Santa Barbara. Daughter, Cindy and
her husband, Steve Reeves of Bishop, grandchildren, Chad, Jason and Emma. Older brother Stan Steele of Big Pine and nephew, Jesse Steele. Younger brother, Buck and his wife, Annie Steele of Weaverville, CA and their children, Mark, Genea, Stephanie and Sandra.

Bob was a lifelong Big Pine resident. The only things Bob loved more than Big Pine was his wife, children and grandchildren. He was the center and maker of fun for them all. He was affectionately known by many as the
Mayor of Big Pine and was named Big Pine’s Citizen of the Decade. He was an active member of the Big Pine Civic Club, helping with the flags at the north end of Big Pine and was the founder of the Haunted Castle in Big Pine. You could always find him hanging Christmas lights
at the Roosevelt Tree, hiding Easter eggs at Mendenhall Park and placing American flags in town.
Bob was instrumental in creating the Big Pine Irrigation ditch system and took great pride in seeing that come to life.

Bob loved music and loved playing his saxophone and flute. He was a member of several bands during his lifetime. He loved bringing the community together with music. His last group is called Sax 5th Avenue, which includes Jim, Zach, Robin, Jack and Mark.

Bob will be dearly missed by his family, friends, and the community of Big Pine.

A celebration of life will be held in the spring. Details to be announced at a later date. In lieu of flowers, you may make a donation to Big Pine Irrigation or the Big Pine Civic Club.