By News Staff on October 31, 2018 in Entertainment/Local Events/Activities, General Misc. Stories, Public Event
Press release
The Slim Princess is taking a road trip to visit some friends.
The recently restored, historic Southern Pacific Locomotive #18 is on the road from its home at the Eastern California Museum to Durango, Colo., where it will be cared for and operated by the Durango & Silverton Narrow Gauge Railroad.

Once in Durango, the locomotive will be operated on Durango & Silverton tracks under the watchful eye of the railway’s mechanical team. Several of those mechanics are quite familiar with #18, since they have been part of the all-volunteer crew with the non-profit Carson and Colorado Railway that successfully restored the narrow gauge locomotive to running order.
That restoration effort took more than a decade and about $187,000 in donations. In July of 2017, the operational locomotive was moved from its longtime perch in Dehy Park in Independence to a new, roomy Engine House on the grounds of the Eastern California Museum. 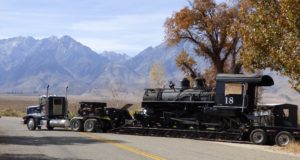 Hundreds of railroad buffs and history fans enjoyed the days that the locomotive was fired up and run on a short stretch of track on the museum grounds. The Slim Princess also made a “homecoming” visit to the Laws Railroad Museum, north of Bishop. The locomotive ran on the narrow gauge tracks at Laws, just as it did during its 26-year life as a Southern Pacific locomotive making the run from Laws to Keeler.
The short-term lease of #18 will allow the Durango & Silverton to train its engineers and mechanics on the operation of an oil-burning, steam locomotive. Currently, the Durango & Silverton operates a fleet of coal-burning locomotives.

It is converting one of its locomotives to an oil-burner. In a press release, the Durango & Silverton stated, “The short-term lease will assist the D&SNGRR’s mechanical team with finalizing the conversion of Locomotive No. 493 from coal-burning to oil-fired steam motive power, and completion of operational training and the fine-tuning of fuel consumption calculations associated with the operation of an oil-burning steam engine.”
The Durango & Silverton rail line has been in operation for 137 years, and offers year-round trips through the remote, scenic high country of Colorado’s San Juan Mountains. Its namesake run takes passengers from Durango to the historic mining town of Silverton. The tourist line also operates shorter runs in the winter months.
The Slim Princess will be hauling passengers on select dates in January and February of 2019, and will be showcased on a special excursion to Silverton in late spring or early summer of 2019.
The Inyo County Board of Supervisors approved the extensive lease agreement at a September meeting. Dave Mull, president of the Carson and Colorado Railway, told the supervisors that the revenue from the planned passenger runs in Durango will cover the costs of transporting the locomotive by truck to Colorado. Depending on the costs, the passenger runs could generate a bit of a profit for the non-profit, he added.
Another benefit of the lease is the chance to give the locomotive a comprehensive, mechanical tune-up in a fully equipped railroad shop staffed by a team of experienced locomotive mechanics, said Mull. That crew includes five Durango & Silverton mechanics and engineers who have worked on the restoration of #18.
The short-term lease also allows both groups to achieve their long-time goals of maintaining a vital link to the region’s railroading history.
As Allen C. Harper, co-founder, chairman, and chief executive officer of the Durango & Silverton Narrow Gauge Railroad, said: “The SP18 has played an important role in the West’s rich railroading history, so D&SNGRR crew and passenger access to this marvelous engine fulfills our deep commitment to preserving these locomotives and historic rail lines for generation to come.”

Bianca Cruz (Orozco) Babcock: 1989-2018
Apparently, size matters to some on the OVGA board
8 Comments
Newest
Oldest Most Voted
Inline Feedbacks
View all comments

Some costs may not apply. Might not need switches if just running to and from shop/station. Believe that’s what Boulder City NV line does. Straight out and back. Valley has some abandoned railways that might not cost as much to rebuild. Sure it’s still pricey. Bet the C&C folks in… Read more »

The same people that paid for the restoration …DONATIONS ! And when operational, recoup the cost through “riders fee” .

Have any idea what government inspections and permits would be involved by laying track for commercial operations? And what kind of insurance would be required in the event of any injuries or inconveniences that might arise? The era of doing something at low cost to have fun passed away long… Read more »

Health and safety: such a scam. I’m sure there are some unemployed carnies who would be happy to set this up over a weekend, cheap. Do it at night when no pesky inspectors are watching. Can there be a cannon to shoot people out of, too?

http://www.acwr.com/economic-development/railroads-101/rail-siding-costs
Who’s going to pay for it?

WOW ! I had no idea of what kind of $$ costs a simple loop would be…it was a nice thought anyway.