2018 Museum Calendar, On the Road to the High Sierra, now available.

After losing the Water War to Los Angeles and then feeling the brunt of the Great Depression, the Eastern Sierra turned to tourism to invigorate its economy in the 1920s and 1930s. 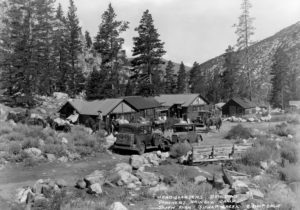 Once tourists arrived via car to Parchers Rainbow Camp on the South Fork of Bishop Creek, they could “rough it” by traveling into the backcountry on a mule. The same combo is still available at Parchers today.

Efforts to promote the area received a big boost in those decades when cars and trucks became more reliable and comfortable. Also in this era, roads leading into the Sierra from the north and south received substantial upgrades, including some luxurious pavement, which also helped steer visitors to the region. Once here, they were enticed to venture into the High Sierra on winding roads that were a bit more, shall we say, “exciting” than well-maintained highways.

To help travelers enjoy their Sierra trip, local businessmen built stylish hotels and inns, while towns made a concerted effort to provide information, supplies, food, entertainment and “inside tips” to the traveling public. “Service stations” provided gas and oil, and mechanics who could repair the still somewhat fragile vehicles of the day. Established Sierra Pack Stations and Fish Camps also quickly began catering to an entire new class of customers who came by car and truck for their outdoor adventures.

All of those factors led to a dramatic increase in tourism in the Eastern Sierra, and laid the foundation for today’s vibrant tourism economy. 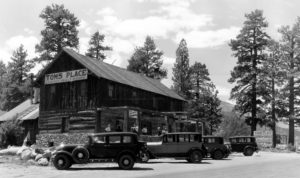 Tom’s Place has been, and remains a landmark highway stop, offering travelers a bit of rest and relaxation during an Eastern Sierra adventure.

The 2018 Eastern California Museum Historic Calendar, titled On the Road to the High Sierra, highlights the development of early car travel and the businesses that sprang up to facilitate this new mode of transportation.

The cover features a fairly brave driver on the new, dirt Whitney Portal Road. Inside, there are historic photos of three iconic, Owens Valley hotels: the Dow in Lone Pine, the Winnedumah in Independence, and the Kittie Lee Inn in Bishop. The Dow and the Winnedumah both continue to host visitors in their ninth decade in business. A bustling downtown Bishop street scene in about 1930 is also featured. 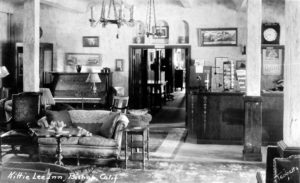 The lobby of Bishop’s Kittie Lee Inn beckoned travelers to stop and enjoy some well-deserved comfort.

In the high country, a photo of Parchers Rainbow Camp shows vintage cars that carried passengers ready to hop on a mule. The June Lake Lodge showed off with a photo of a huge stringer of fish held up against a stylish automobile. Photos also show the early days of Tom’s Place and the former Little Lake resort complex.

The 2018 Eastern California Museum Calendar is available at the Museum, 155 N. Grant St., Independence, for $10; if ordered over the phone at 760-878-0258 and mailed, the calendar will cost $13 to cover postage and tax. Credit card orders are also accepted over the phone. 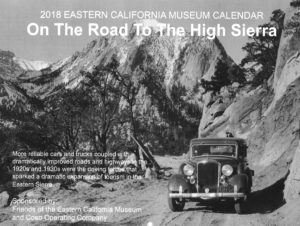 How did “El Camino Sierra” originate?

Dodger fans, Lakers Fans, and most fishermen are all the same person.

Show up with enthusiasm, but leave nothing but trash

Bishop P.D. can’t allow the riff raft to get the upper hand. Never had a bad encounter with any officer of the p.d. I couldn’t agree more regarding the DFW even though I’m not sure what natural trout you’re talking about. DFW has been in damage control since the first… Read more »

Its over. 20 years ago the Eastern Sierra was at 50% of what it was in the 1950s as far as fishing and hunting and Recreation. Today , it has basically ceased to exist . The City of bishop has become nothing more a ROAD TRAP set up to Hotel… Read more »

Tata. And don’t let the door hit you on your way out.

The road to the Sierra, Would that now be called El Camino Sierra?