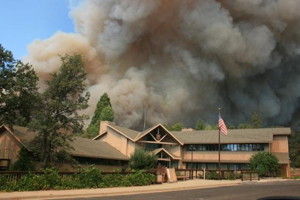 The Great Basin Unified Air Pollution Control District is re-issuing an Air Quality Health Advisory to notify the public of unhealthful air quality in Alpine County and northern Mono County due to smoke from the Rim Fire.

Air Quality Monitors recently installed at Bear Valley and Markleeville confirm a VERY UNHEALTHY AIR QUALITY INDEX (AQI) in Bear Valley and UNHEALTHY AQI in Markleeville. Current particular matter (PM) levels are at or exceeding the state standards for PM10.  These conditions are expected to continue until the fires are extinguished.

A portion of the Tioga Road, from Crane Flat to White Wolf, will be temporarily closed to all vehicular traffic beginning tomorrow, Wednesday, August 28, 2013, at 12:00 noon.  The closure is necessary for firefighters to perform fire suppression activities along the road.  This portion of the road is anticipated to be closed at least through Labor Day Weekend.  The park will issue an update as conditions allow for the reopening of the road.

“The work that will be performed over the next few days is instrumental in suppressing the Rim Fire within Yosemite.  The safety of the firefighters working along the road is our paramount concern,” stated park Superintendent Don Neubacher.

A fund to help the park restore trails, facilities, and wildlife habitat has been established by the Yosemite Conservancy.  People wishing to contribute to the fund can donate online atyosemiteconservancy.org/fire.  People can also donate via mail by sending donations to Yosemite Conservancy 101 Montgomery, Suite 1700 San Francisco, CA 95104.

For up-to-date Yosemite information regarding the Rim Fire, please visit the park’s website at: http://www.nps.gov/yose/planyourvisit/rimfire.htm.

Firefighters worked overnight on yesterday’s spot fires and continued with line construction throughout the fire.  Crews were successful in getting a dozer line around  spot fires at Duckwall Mountain. Firefighters were able to get line in, and successfully burn out the adjacent to Yosemite National Park south of Highway 120 to slow the spread of the fire.  Today, fire crews will continue working the spot fires and structure defense north and south of Highway 120 from pilot Ridge to Yosemite National Park.  Fire fighters will also continue with contingency line construction in advance of the communities in the Highway 108 corridor.

The evacuation advisory from Tuolumne City and the area east of Highway 108 has been expanded to Pinecrest Lake.  Highway 120 at the Yosemite National Park boundary west to Buck Meadows has been evacuated.

An evacuation center is located at the Mother Lode Fairgrounds in Sonora.

We work to provide daily news to all of the Eastern Sierra, in the tradition of Eastern Sierra News Service and the Sierra Wave. We bring you daily happenings, local politics, crime, government dealings and fun stuff. Please contact us.
View all posts by News Staff →
LADWP Commissioners say yes to Mono Basin agreement
MCWD will appeal geothermal development project
2 Comments
Newest
Oldest Most Voted
Inline Feedbacks
View all comments

Here is something I’m sure the little business’ and towns up and down HWY.395 won’t like hearing with the Labor Day week-end coming up…Visitors are being told,both by the flashing Cal-Trans signs,and at the local visitor center here in town that HWY 120…the road leading into Yosemite from the East… Read more »

Wayne, this press release was sent out by Mammoth Lakes Tourism to all lodging establishments and businesses in Mammoth Lakes yesterday so most are aware of the situation and hopefully are informing their guests accordingly: “Portion of Tioga Road in Yosemite National Park to be Temporarily Closed Closure Needed to… Read more »