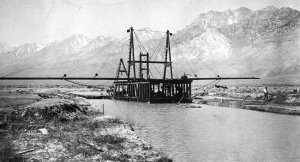 Aqueduct Construction Dredge: This suction dredge worked on the unlined portion of the Aqueduct, from the Intake to the Alabama Gates.

The Eastern California Museum’s 2013 calendar features more than a dozen photos of various phases of the construction of the Los Angeles Aqueduct. Work on the 238-mile long Aqueduct started in 1908 and the massive project was completed in 1913. Once complete, the Aqueduct conveyed the waters of the Owens River to Los Angeles, a task it is still performing today.

The calendar is the first of several projects the Museum is planning to commemorate the Centennial of the LA Aqueduct. Throughout 2013, plans call for exhibits in the Museum, educational programs, a speaker series and a film series, all of which will explore the construction of the Aqueduct itself, and the far-reaching ramifications completion and operation the structure created in the Owens Valley.

However, the 2013 calendar focusses solely on construction of the Aqueduct in Inyo County, and features numerous 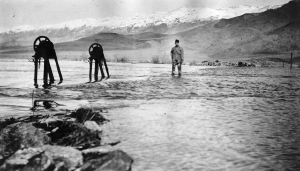 Aqueduct-related photos that have either never been seen, or are rarely shown.

For instance, one photo shows the Aqueduct Intake completely flooded by a rebellious Owens River, much to the chagrin of the worker standing in the water. Another photo shows a young couple perched on the bucket of a huge steam shovel. A skeletal-looking floating contraption with what appears to be wings reaching over the sides of “the ditch” is a suction dredge. The electric-powered dredge was used to work on the 21-mile stretch of “unlined” Aqueduct, from the Intake across from Aberdeen to the Alabama Gates, north of Lone Pine. Bessie Van Norman, in her finest formal Victorian dress, stands at the Intake after christening the structure by breaking a bottle of champagne on its concrete gates. A rather motely looking crew of Aqueduct workers are shown in one of the many work camps along the Aqueduct’s route. At any time, up to 5,000 men were working to build the Aqueduct. A bee hive of activity is shown in the photo depicting crews working to pour concrete in the “lined” section of the Aqueduct.

The 2013 calendar was made possible by the ongoing support of the Eastern California Museum by the County of Inyo Board of Supervisors; a generous donation from the non-profit Friends of the Eastern California Museum (www.fecm33.org), and a special donation from Coso Operating Company – Terra-Gen Power, LLC, which operates the Coso Geothermal Plant, in Inyo County, and is one of the largest producers of renewable energy in the West (www.terra-genpower.com).

How long till DWP pulls the lease on the museum???