In an effort to cut back the budget by the $800,000 that the Town Council had requested and was recommended by MTRiP (Mountain Travel Research Program) consultants, Rob Clark, Town Manager of Mammoth Lakes brought a proposal to a closed session meeting on Monday night, August 31. The proposal suggested laying off the Tourism and Recreation Director position as well as a Senior Planner position. The reasoning was that these two positions would most likely not be necessary once the Tourism and Recreation Department is completely restructured and the Destination Marketing Organization, or DMO, is put into place. However, the DMO transition is not expected to be complete until next summer. Laying off those two positions at this time would have disrupted the transition period, officials said. 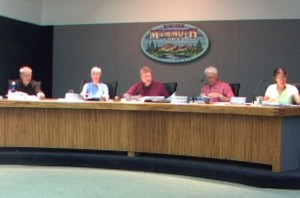 Several of the Towns agency partners got wind of what was going on prior to Mondays meeting and called the Council members to let them know they did not agree with these possible cuts. By the time Wednesday nights regular Council meeting rolled around, the idea had been vetoed, and Clark made a public statement that the Town was committed to working on a smooth transition from Tourism and Recreation to the DMO.

We will have a participatory process going forward, Clark said.

Instead, the Town has offered retirement incentives to two more employees: a Sales and Marketing position and the Town Clerk position. The two individuals holding these jobs have agreed to the retirement package and will retire by the end of the year. Two other positions, an Account Clerk who is planning to leave before the end of the year and a Police Sergeant position that was recently laid off will be frozen at this time. These cuts and freezes will save the Town $557,476 of the $800,000.

We work to provide daily news to all of the Eastern Sierra, in the tradition of Eastern Sierra News Service and the Sierra Wave. We bring you daily happenings, local politics, crime, government dealings and fun stuff. Please contact us.
View all posts by News Staff →
Town Council Meets Tonight on Fate of Blondie the Bear
Tri County Fair Opens for 2009