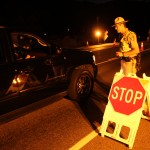 The checkpoint location was US 395 at Hackney Drive, Walker, California.  Between 5:50 PM and 10:45 PM, 591 drivers entered the checkpoint where officers briefly spoke with them to determine if further evaluation was required.

Of the 591 drivers contacted, eight were issued citations for being unlicensed or driving with a suspended driving privilege.  No vehicles were towed or impounded.  Arrangements were made to have friends or family pick-up the eight unlicensed drivers.  No arrests were made.

“Our personnel spoke with a lot a drivers in just under five hours.  Licensed drivers who had not been drinking experienced minimal delays.  I was happy to see both the public cooperation and that no drivers were arrested for having made poor decisions related to vehicle operation coupled with alcohol or drug use,” said Lieutenant R. D. Cohan, commander of the CHP Bridgeport Area office.

We work to provide daily news to all of the Eastern Sierra, in the tradition of Eastern Sierra News Service and the Sierra Wave. We bring you daily happenings, local politics, crime, government dealings and fun stuff. Please contact us.
View all posts by News Staff →
Harry Potter villain believed to have died in Death Valley
Marijuana seized, pot grow and firearms
9 Comments
Newest
Oldest Most Voted
Inline Feedbacks
View all comments

Maybe someday when we get the rest of Nancy and Ronald’s senile old friends off the Supreme Court ,we will be able to travel freely without harassment someday.

Driving isn’t a right. It is a privilege earned by passing the required tests, following the regulations of the vehicle code and not accumulating too many violations or traffic collisions. If you can’t do that, then park it and walk. Quit whining like a spoiled child. There are more important… Read more »

A privilege granted by whom? The Law? Please… Sorry but some of us can think for ourselves, we don’t need a bible or a law officer to tell us how to do the right thing.. I believe in human judgement, not this ” by the book” “no tolerance” approach, yes… Read more »

DT,
Privilege my eye. It’s a right to move freely. Such as our right to free speech, right to peaceable assembly, right to petition grievances, bear arms etc. A regulated right yes, but a right none the less.

Trouble….Whenever I see your posts degrading Law Enforcement for doing their job to keep the highways a better and safer place for us,not only with these check-points to deter drunk drivers,but with the arrests they make getting them off the roads,your posts remind me of that old Beastie Boys song… Read more »

Wayne, one more time. I have nothing against the police . It’s our civil rights that are being taken away at a alarming rate that erks me. You really should work at not accusing people of things that they never said or did. I a real pisser.

No sorry fools this time? well that’s good, maybe the law eradicated all the DUI drivers so we can go back to not having to worry about these pesky checkpoints, well maybe not, as long as they can justify them with the public because having unlicensed drivers off the road… Read more »