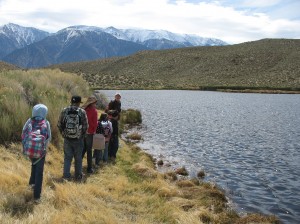 This property includes numerous springs and seeps, ponds, and both wet and dry alkali meadows. The protection of wetlands and riparian areas is crucial in arid regions because of their role as critical wildlife habitat. The property is managed as a grazing operation that balances the goals of productive working lands with the protection and enhancement of important plant and wildlife habitats.

The easement property is known to provide habitat for numerous resident wildlife species, migratory waterfowl on the Pacific Flyway, endemic rare plants, and will soon provide a critical refuge for a vulnerable native desert fish.

In the summer of 2010, the US Fish & Wildlife Service (USFW) expressed interest in a project that would benefit local populations of a native fish, speckled dace, whose populations had become small and isolated, making them particularly vulnerable to extinction in the wild. Through careful research of previous field survey records dating back to the 1930’s it was discovered that the Benton Hot Springs Ranch once hosted a population of these fish and could provide an ideal site to re-establish the species. With this information, supported by careful planning efforts, ESLT was awarded funding from the USFW to complete a restoration project at this site.

This September, ESLT will begin on-the-ground work at Benton Ponds. The objectives are to improve habitat for many wildlife species by controlling the aggressive hardstem bulrush, replacing it with native three-square rush, draining the pond in order to eliminate the non-native and predatory Sacramento perch, refilling the ponds, and re-introducing native speckled dace.

The ponds and springs on this property provide extensive bird habitat. This project will be completed during the appropriate season, which will ensure that nesting birds will not be disturbed.

This project, as is true for many of the most successful land conservation and restoration projects, has only been made possible through the collaboration of a number of key partners: a willing landowner, a land trust, skilled biologists, and important funding agencies. Whether attracting researchers interested in studying the results of work being done, identifying future funding partners, or attracting volunteers interested in getting their hands dirty, partnerships such as these will greatly benefit the plants, wildlife, and people of the Eastern Sierra.

If you have questions or comments about the project, please contact ESLT’s Land Programs Coordinator, Aaron Johnson, at (760) 873-4554. To get involved with this project as a volunteer, contact ESLT’s AmeriCorps member Hillary Behr at the same number. For more information about ESLT, visit www.eslt.org. 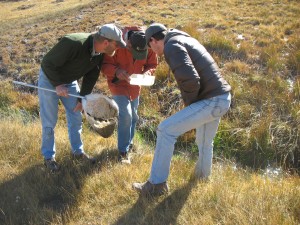