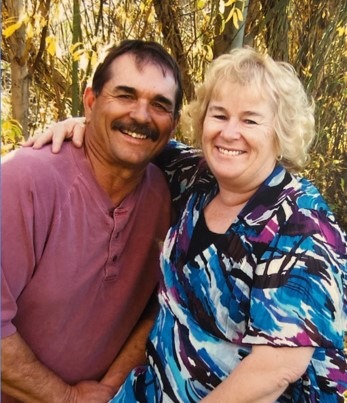 Liesa Marie Comeau was born in Herkimer New York on March 2, 1954 and was called home to be with Jesus on December 16, 2020 in Bishop California.

Liesa was born to Willis and Ann Strobel. She was 3rd in the line of 8 kids, 4 boys and 4 girls. She and her family moved to Huntington Beach when she was around 10 years old. In 1975 she met the love of her life, Chris Comeau through her brother. They quickly fell in love and she moved to Bishop to start her life with him. In 1979 they had their first daughter Erin Lee Comeau and then in 1982 they completed their family with another daughter Jennifer Suzanne Comeau (Park). 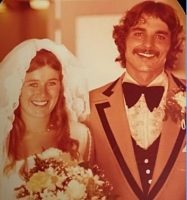 Liesa and Chris Comeau on their wedding day in 1975

In 1986 they moved to Dayton Nevada and quickly realized that their home was in Bishop, so they moved back. Around 1990 Liesa went back to College to become a preschool teacher. This is where she really shined. She became one of the most known preschool teachers in the Valley and was known to everyone as Teacher Liesa.  She worked in the local preschools until she got sick in 2017.

Liesa never met a stranger. She loved everyone and was very involved in helping teens in various youth groups around the Bishop area. She was also passionate about helping people find sobriety. Liesa was always positive even in her toughest moments she stayed positive. She loved Jesus with everything she had and loved her family in Christ at Calvary Baptist Church.

And the many, many adults and children who once called her the “bestest Teacher Liesa.” Liesa’s positivity will live on in those that loved her, and we only hope to live with the grace that she walked through life with, especially at the end.

In lieu of flowers please make a donation to Inyo Mono Association for the Handicapped or any local preschool in her name. Services will be set at a later time. Fly high with Jesus Momma and we know you’re up there talking his ear off.

A bunch of us “Outlaws” are going to miss you, but we know where you are, and we’ll see you soon.
BobK.

I really can’t believe she is gone. I got the pleasure of meeting Liesa when I was working with public health collaborating in providing oral health presentations to inyo county preschoolers in 2007 -2012. I looked forward to being at the preschools especially since Liesa was there to cheer on… Read more »