One of the anomalies of life in California is the perpetual threat of wildland fires. Whether the winters are wet, like this year, or dry, the only real difference is the abundance of fuel by mid-spring. 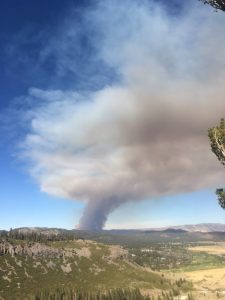 While Forest Service and CalFire are working on controlled burns in an effort to strategically reduce fuels and create defensible space around communities, the Camp Fire that wiped out Paradise, a town of more than 26,000 on the west side of the mountains really brought home the fact we’re facing a new, year-round reality.

Residents are taking some matters into their own hands with the encouragement of Inyo and Mono counties. Inyo Supervisors voted to waive landfill gate fees for green waste over Earth Day weekend, April 20-21. Last fall, the Town of Mammoth Lakes and Inyo National Forest staff held a workshop to bring home the point of what could be done by government entities and what was up to local residents.

Mono Supervisor Stacy Corless reenergized the Mammoth Lakes Fire Safe Council with just one informational meeting. Inyo’s Emergency Services Manager Kelley Williams has been making contact with area communities and Tribes to either start up Councils or revive existing ones. She’ll be part of Bishop’s Earth Day celebration at the City Park on April 20 with hand-outs and information.

After the Round Fire in 2015, Wheeler Crest’s Council became more active. According to Swall Meadows resident Karen Farrell-Ingram, the Council developed a Community Fire Protection Plan to analyze the community’s hazards.

The Council has been able to get grants through CalFire to address high risk areas and complete fuel reduction and brush pick-up. Mono County stepped up to help the group manage the grants, Farrell-Ingram said.

Williams recommends Councils become 501-C3 non-profits in order to be eligible for those kind of grants. Wheeler Crest affiliated with the local fire protection district, already a 501C3, but that won’t work for all communities. Williams has been sending out packets to interested community members in Inyo; those packets include information on forming a Fire Safe Councils as well as the 501C3 process.

Some of the Wheeler Crest projects are simple—like putting up street signs. Others are not so simple—like working on a second route in and out of the community.

Farrell-Ingram seems to have come up with the key to keep residents interested and active: quarterly meetings that function as both social and informational gatherings with workshops on defensible space and evacuation tips.

One known factor—California’s fire season is now year-round. Eight years ago, a fire wiped out 19 structures in Big Pine in March. The Round Fire happened in February.

Here are some websites to check out for additional information: http://www.cafiresafecouncil.org/ https://www.nfpa.org/Public-Education/By-topic/Wildfire/Firewise-USA