There is no such thing as “defensive driving” when you are sitting at home and a car plows into your house. It’s not as if houses are generally sitting or idling out in the middle of the street…unless you are driving a motorhome. Yet cars plowing into houses happens, and it has happened several times in the area just the past few months. One resident told the Bishop City Council members that she would like to see something done about it.

At last Monday’s City Council, Bishop resident Jean Redle told council members that she is concerned about “speeding and racing down city streets.” And that it makes her anxious and concerned. 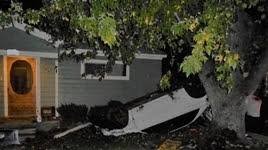 Redle should be. Sierra Wave readers and listeners may recall that back on Sunday, Oct. 18, we reported a story eight weeks ago about a “DUI and Collision with a parked car and house in Bishop.” It happened around 11 p.m. at night, when a local 20-year-old man lost control of the vehicle he was driving, crashing into a parked car and a residence on the 300 block of Clarke Street. Both the car and the house belonged to Redle, where she lives with her partner.

“We, my partner and I, were very lucky to not be killed because my car was parked in an unusual spot in the driveway that evening that took the brunt of the force,” says Redle.

Redle later learned from speaking to others that some city streets are being used as drag strips, and since then she says, she’s “noticed a lot of cars speeding between 10 p.m. and 2 a.m.”  She calls the Bishop Police Department and says that “they’ve been kind to go out and do patrols.” She said that she even offered to have BPD install a speeding camera at her residence.

Acting Police Chief Josh Ellsworth, said his department would look to deploy a radar trailer in the neighborhood with increased enforcement. Ellsworth noted that, “Fortunately, those are hours that we’re not as busy so we can get some enforcement out there during those off-time hours and then hopefully make an impact.”

Chief Ellsworth noted that radar trailers are not equipped with cameras that can take photographs of speeders, which in California is not legal. (Red stoplight cameras are legal in some cities in California, but not speeding cameras.)

Public Works Director Deston Dishion said while the radar trailer does not take photographs of car license plates, etc., it can provide valuable data such as how many cars went by, how fast they were traveling and the times of day. The only problem it would seem to have is that, as Dishion remarked, “It does do a good job while it’s there.” Which by implication means not so good when it’s not.

It’s not only speeding and racing that causes the problem with cars going out of control, going off the road, and hitting a residence. Drunk driving is as big a problem as well.

395 is an obvious target with all the bumper-huggers from all points south into Los Angeles. They simply don’t have respect for the people who live in the communities through which they pass. Heck, they just don’t have any respect, period. But we can say the same of folks who… Read more »

Ok, Bishop needs a nearby drag strip for motor sports. Give a place for young drivers with gasoline in their veins a place to learn how to do it right, build a community of car enthusiasts and stay off the streets. Some municipalities have done this at little to no… Read more »