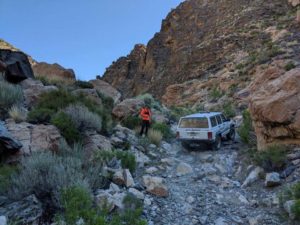 Following a massive multiagency search and rescue that involved resources from throughout California including – ground teams, dog teams, and aerial reconnaissance, Powell and her dog were successfully located on July 15 near Montenegro Springs, approximately 2.5 miles from her last known location.
Mrs. Powell’s recounting of events leading up to her disappearance involve being approached by an unknown suspect with a knife, the suspect threatening her and her dog with the knife, the suspect making a sexual remark, then her running away from the suspect and ultimately getting lost.
We are asking that the public be on the lookout for anyone matching the following description: under 6 feet, 180 pounds, bald/shiny head, dark eyes, brown eyebrows, white male but with tanned skin, potentially with a Southern accent, around 50 years old, no visible tattoos, stocky, dark colored backpack, dark green button up shirt with long sleeves, dark colored pants, armed with a 6-8 inch bladed knife with a dark colored handle.
Now that Mrs. Powell has been rescued and is back with her family, our primary concern is public safety. Short of Mrs. Powell’s eyewitness account of the suspect, there have been no other reports of someone matching this description or incidents reported in Inyo County that are similar to this.
This case is considered an open investigation – we are urging the public to report anything that might assist by calling 760-878-0383, option 4.

Two and half years later and virtually nothing has been mentioned about this case. No leads on this supposed man who chased Sheryl Powell….also I’m wondering if the Powells generously donated to our local Search and Rescue organization for their tireless efforts to find Mrs. Powell?

Eamon
Not to mention,the $30,000 + “GoFund me” account that was set up and collected while she was “missing”….

Asking again, Has anyone followed up on this story and the search for this supposed suspect? It’s been almost 2 years and after 4 days of endless local, state, and national news stories it seems to have been forgotten. Has anyone spoken to Mrs. Powell in the past 2 years… Read more »

Sierra Wave put in a request to the Sheriff’s Office eight days ago, but we have yet to receive a response. The report should be a public record. SW’s interest is in a better understanding of what happened, but we’re not looking to extend this story out any more than… Read more »

I can’t believe most of these responses. The Powell’s had to endure the baseless beliefs the husband killed her. Now they don’t believe the wife’s story. If you don’t have something constructive to say just zip it. No remarks intended to be funny were pathetic. Leave criminal investigations to the… Read more »

What about the people that looked for her? What if someone got hurt? Family is always the first suspects in a crime, should the Powell’s be treated differently? What is constructive @ your comments Mr, Overton? Mrs. Powell’s story is unbelievable. I’m female and have hiked these mountains alone for… Read more »

Gee, I think Sierra wave is refusing to post any comments that aren’t favorable to the Powell’s. Anybody else think so ?

No, I think there are a lot of smart people in Inyo/Mono calling BS….I’m hearing crickets in the follow up investigation.

Description sounds like half of Inyo County to me? :))

Oh,gosh,let’s not get all that crazy drama started up again,and I’m betting as to why Law Enforcement got so tight-lipped about things with Karlie Guse,seeming not wanting much public help or input….bickering families,dueling private investigators,physics,Dr.Phil,Nancy Grace playing the blame game with no evidence…..others blaming LE for “not doing their job”..… Read more »

I’m sure the authorities have thought of this. Karlie is still missing and this whako May be involved

You know, its pretty obvious to most people, but they are too polite to say, that the Powell’s faked up the majority of their “story” I remember a quote from Tommy Lee Jones, ” yes, its true that it IS A STORY”. I don’t think Karlie Guses actual disappearance should… Read more »

I know it’s a stretch but could this be the same person that slashed the horses last July near Big Pine?

This guy sounds more like a kitty cat slasher than a horse slasher!

Okay, you guys are cracking me up…

Has anyone followed up on this story and the search for this supposed suspect? It’s been almost 2 years and after 4 days of endless local, state, and national news stories it seems to have been forgotten. Has anyone spoken to Mrs. Powell in the past 2 years for a… Read more »

I’m withholding judgment on Ms. Powell’s story till I hear what her pooch has to say.

And what color hat was he wearing?

The suspect sounds like Eddie Sherman from Seinfeld – the wacko Elaine promoted at the J. Peterman catalog.

Steve
Reply to  The Mind Races

I don’t suppose you know the season and episode? Now I’m curious.