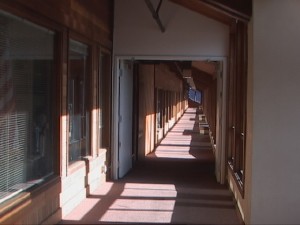 for potential budget cuts. Other sources have indicated that the Town Council may actually eliminate several department heads positions. One thing is for sure, Town Manager Rob Clark said that he will issue a memo Wednesday afternoon with positions he recommends for layoff if the Council wants to go that direction.

After Monday night’s Special Town Council meeting and closed session on labor matters, Manager Clark said there was nothing reported out of that session. Clark clarified that he would issue a memo Wednesday that would recommend positions for layoff if the Town Council heads in that direction to balance the budget.

As we reported yesterday, Manager Clark’s agenda bill for the Town Council meeting Wednesday indicated that there is no longer a $1.5 million shortfall. He says various factors have reduced the deficit down to around $717,000. Clark gives six options for balancing that deficit, including layoffs and employee concessions.

Mayor Skip Harvey said that the town manager “has some direction but there still may be questions of how to carry things out.” Mayor Harvey said that by approving the budget, the Council would approve positions. He called the whole process “very, very tough.”

More expected at tonight’s Town Council meeting, 6pm in Suite Z. The budget hearing is the third item on the agenda.

We work to provide daily news to all of the Eastern Sierra, in the tradition of Eastern Sierra News Service and the Sierra Wave. We bring you daily happenings, local politics, crime, government dealings and fun stuff. Please contact us.
View all posts by News Staff →
Scout Helps Rescue His Father After Car Accident
Man Sentenced in Case of a Three-Year-Old Driving a Car