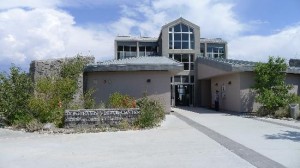 Word circulated quickly Thursday morning that a shooting had taken place in Lee Vining at a visitors center. According to Lee Vining Fire Chief Tom Strazdims, who assisted paramedics, an Oregon man had apparently shot himself. He and his car were in the parking lot on the shore of Mono Lake at the Forest Service Visitors Center, which is closed for the winter.

“They located the man in the parking lot with a single gunshot wound to his chest. The man was taken via ambulance to the medical clinic in Bridgeport and then transported via Careflight to Renown Medical Center in Reno for treatment. The circumstances of this incident are currently under investigation, but it appears this was a suicide attempt by a self-inflicted gunshot wound.”

We work to provide daily news to all of the Eastern Sierra, in the tradition of Eastern Sierra News Service and the Sierra Wave. We bring you daily happenings, local politics, crime, government dealings and fun stuff. Please contact us.
View all posts by News Staff →
Mono Supervisors send letter of complaint on Verizon to PUC
Stolen petroglyphs recovered