In the last month, several reports have gone public that air traffic controllers on duty at night have fallen asleep on the job, 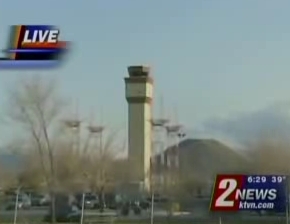 Reno TV news reported that the air traffic controller on duty was asleep when the plane from Mammoth Lakes arrived.

leaving pilots to figure out landings on their own. Reports have come from Washington, D.C., Detroit, Knoxville and then this week – Reno-Tahoe Airport where a medical flight from Mammoth Hospital got no help to land.

Lori Ciccarelli, Community Services Director at Mammoth Hospital confirmed that a Mammoth patient in critical condition, was air flighted out to Renown Hospital in Reno.

According to Reno television news, the medical flight from Mammoth Lakes was forced to land without assistance at Reno-Tahoe International Airport. Reports said the pilot was unable to reach anyone in the air traffic control tower when he arrived around 2 am Wednesday.

Reports said later it was learned that the only person on duty in the tower that shift was asleep. News from Reno said that the pilot tried multiple times to reach someone in the tower. Krys Bart, CEO and president of the Reno-Tahoe Airport, was quoted as saying that the pilot evaluated the weather which was clear, conditions were optimal and then he made the decision to land. He did so without incident. News reports said this is the third time in two months an air traffic controller has been caught sleeping on the job.

The FAA changed its staffing policy to require two people on duty during late night shifts. Some reports said that records show the twin-engine turbo prop that landed in Reno is registered to Sierra Aviation of Bishop. When we called Sierra Aviation for information, the person who answered the phone refused to comment.

We work to provide daily news to all of the Eastern Sierra, in the tradition of Eastern Sierra News Service and the Sierra Wave. We bring you daily happenings, local politics, crime, government dealings and fun stuff. Please contact us.
View all posts by News Staff →
Prosecution case unfolds at Leplat murder trial
LADWP grants easement to Inyo for Bishop Airport