By News Staff on August 13, 2013 in Government Agencies/Utilities 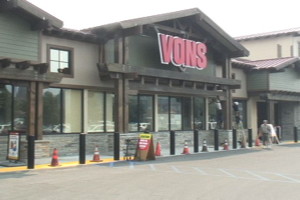 Members of the Mammoth Town Council and other community leaders joined Vons executives last Thursday to celebrate the grand opening of the new and improved Mammoth Lakes Vons, a project that cost nearly $5 million.

After four months of construction, the upgraded Vons has a new look, more floor space to shop and new lines of products. Vons President, Lori Raya, was quoted in a Vons’ press release. She said, “You won’t find anything like it at any other store in our division.” The facelift is described as “rustic.” Raya said, “We wanted to capture Mammoth’s character as a mountain town while we made in-store improvements.”

By use of more than 3,000 square feet of space in the Vons-owned shopping area next to the store, the company was able to relocate the Starbucks and pharmacy, which also allowed for expanded offerings in the main store.

Vons officials said that in the store’s produce department customers will find a larger section of specialty vegetables, including a 16-foot “kale corner” featuring six different types of regular and organic kale.

The store also added two 12-foot glass display cases in the meat and seafood department, and now carries bread and other fresh baked goods from Schat’s Bakery, as well as coffee bean varieties from the Looney Bean Roasting Company.

Mammoth Mayor Rick Wood is quoted by Vons as saying, “Council recently prioritized economic development and the Vons remodel represents a catalyst for positive change in our community.” Wood also commended the grocery chain for taking what he called a comprehensive local approach to the project, while also adding 19 permanent positions to the store’s team.

In celebration of the store’s grand opening, Vons representatives presented the Mammoth Schools NOW Education Foundation with a $5,000 donation to support the public schools in the surrounding community.

…as a certain idiosyncratic Vons cashier is fond of saying upon completion of checkout: “Thank you for shopping at Vons…your only choice.”

Yeah, but it’s modern and it has 16 different kinds of kale. And fake windows on the front.

Gee, some people just look at the dark side of things.

There is a special place reserved in hell for Vons. It is worse than going to Bakersfield, and that place sucks. Why is the candy next to the cheese and the cheese next to the veggies. And the cereal in the diapers? The vegetarian selection has almost diminished and the… Read more »

with the prices Von’s charges it should have been a 10 million dollar remodel.

Looks like I shook the Safeway trolls out of hiding. I’m sure they will convince many of you how great this “modern” store is and how much better your tomatoes will taste now that they cost more. Style without function and then spend even more telling people how great it… Read more »

Nope, no Safeway troll here. I hate shopping at Vons as much as anyone. But, given they are the only game in town (ie. why bother to invest in attracting an already captive audience?) I’m happy they decided to try and make the store and an otherwise crappy-looking shopping center… Read more »

For the record — I don’t hate shopping at Vons. Having a full service market in Mammoth Lakes is a God send. I remember before Vons. There was a market about where RiteAid is today. Adequate for my needs then but nothing like Vons is today. I just think that… Read more »

I think it looks really Nice. There’s a lot of new products that I actually want to buy. Not having to go inside Vons when I just need an Rx is awesome. Cheer up everyone it’s just a grocery store.

The ONLY grocery store you mean – and one that has a monopoly on the town’s populace.

Bring Trader Joe’s or any lower cost market to Mammoth. It will save every family in this town money. Competition is a good thing for the consumer.

Check out this FB page: https://www.facebook.com/BringTraderJoesToMammothLakesOrBishop

Store and parking lot still a zoo, prices are silly…but it still beats living in the big city.

Sorry I hardly noticed a change

It’s new but not better. People used to be able to drop off a perscription, shop and then pick up the prescription without leaving the store. Now it’s two rather long and awkward walks. Same with the Starbucks. Stupid move. And they really have mostly the same stuff — it… Read more »

How lazy/ out of shape are you? Its right next door[pharmacy]. Prices hard to read.?Time for new glasses. Vons in Mammoth has always been over priced,The meat will always suck because its the end of the delivery line from LA. Dont like the prices? Its called gouging.Its part of living… Read more »

Oh Ken, we can always rely on you to find the dark cloud in the silver lining! What a wonderful ray of sunshine and positivity you always are. By your standard, no one should ever do anything positive, invest any money in this community, or ever try and make the… Read more »

When is Trader Joe’s coming to town?