By News Staff on January 8, 2013 in Government Agencies/Utilities 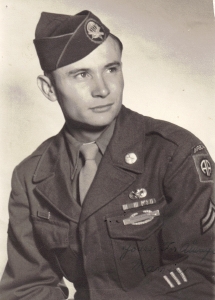 We were nearly deprived of Marv’s illustrious example of how to truly live on the day his life began. The folks attending Marv’s mother as she gave birth thought he was stillborn, so set his seemingly lifeless form on the kitchen table as they attempted to save his mother’s life. Ten or fifteen minutes later, as his mother showed signs of improvement, they heard a cry from the table; Marv was alive! After that, Marv never looked back, applying a voluminous energy and focus to every task he performed, embracing both beloved pastimes and dreaded obstacles with the same gusto and can-do attitude that was so prevalent amongst many of his generation.

During the Great Depression, Marvin’s family migrated westward in hopes of finding work, first to Raton, NM, where his father worked at a chicken farm in exchange for food, but no wages. Extremely poor, the family remodeled a chicken coop for their habitation. The Tetricks moved west again, eventually settling in Southern California—first in Long Beach, then Compton. To contribute to household finances, Marv worked a paper route as a young boy, sold magazine subscriptions and shined shoes with a shoe-shine box he built himself out of scrap lumber. With the shoe-shine box strapped to his bike, Marv oftentimes pedaled from Compton to Long Beach Harbor to shine shoes for sailors who were a little more generous with tips on payday.

A gifted natural athlete, Marv enjoyed ocean swimming and surfing. He built a wooden long-board and surfed off Palos Verdes with friends in the 1930’s and early ‘40’s. He also joined the gymnastics team at Compton’s Enterprise High, attending classes with baseball Hall of Famer, Duke Snider.

When he was 18, Marv and a few of his buddies cruised around a Gardena neighborhood looking to meet up with a girl whose address they had on a scrap of paper. They spied three cute girls in the driveway of a house and figured this was the place. It was the wrong address, but the right girl. Romelia “Rickie” Glavis thought Marv was the right boy, too. They were engaged around the time that Marv was drafted into the United States Army in 1943, the same day as his best friend of 81 years, Gene “Zoot” Snyder.

In an effort to stick together, Marv and Gene Snyder volunteered for the Army’s paratrooper division, entering the 517th Parachute Regimental Combat Team. Returning from training for a five-day leave, Marvin wed Romelia on March 31, 1944, shipping out to the European combat theatre in June of the same year. Marv saw action in Italy, Belgium and France, surviving two hard winters on the front and fighting in the bloody Battle of the Bulge. As the war concluded the 517th was absorbed into the 82nd Airborne Division; Marv and Gene became part of the occupying allied force in Berlin.

Returning home from the war, Marv continued his schooling at Compton Junior College. He and Rickie welcomed a son, David, in 1946. Around that time, Gene Snyder trekked up to Bishop, CA, seeking employment. He told Marv about the opportunities and invited him to take a look; both Marv and Gene were hired on with the California Division of Highways (now Cal Trans), Marv receiving his first paycheck in early 1948, eventually earning his Civil Engineers License and becoming a Resident Engineer at Division of Highways. Marv and Rickie had their second child, Donna, in 1949, just as Marv, along with Gene, began working on the extensive road improvement projects that widened Highway 395 from two to four lanes from Mojave to Topaz Lake. Marv also oversaw numerous highway jobs in Inyo, Mono and Kern Counties. He and Gene retired together in 1987, after 40 years of service.

Marv was a working class Renaissance man if ever there were one. He was a member of the Toastmasters and 20-30 Club, President of the local chapter of the California State Employees Association, a comedic skit writer and performer, a member of Playhouse 395, not to mention a skilled practitioner of home economics. Marv was also an avid backpacker, fisherman and amateur naturalist, a champion for the preservation of the Desert Tortoise, bonsai enthusiast, lifelong gardener and die-hard Dodgers fan. A self-taught mechanical genius who could fix just about any device, Marv could often be found tinkering under the hood of his 1939 Ford flatbed pick-up truck. Marv was also a prolific storyteller. Chances are, if Marv was talking, he was telling a story, right up to his final days.

Throughout his life, Marv possessed a fearless love of adventure and insatiable curiosity about life. He always wanted to know more. He exuded unparalleled vibrancy, had a keen sense of humor and an infectious laugh. Marv did not speak ill of others and was never anything but kind to friend and stranger, alike. He approached life, and death, with a rare grace, courage and humility. Marv never complained and always did his best, even when illness reduced his capabilities. His example will continue to influence those who knew him for years to come.

Services are scheduled for Saturday, January 12 at 10 a.m. at Brune Mortuary, in Bishop, with private interment to follow. A reception for friends and family is set for 12 Noon at Whiskey Creek in the Kitty Lee Room. In lieu of flowers, the family asks you to please consider donations to the Parkinson’s Disease Foundation, or the charity of your choice.

What a wonderful man and inspiration