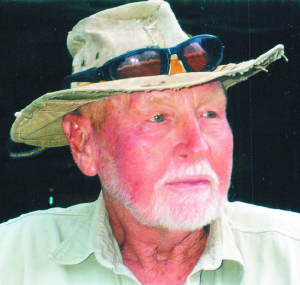 Funeral mass will be held at 11 a.m. Friday, Dec. 4 at Our Lady of Perpetual Help Catholic Church in Bishop for Martin Charles Wolf. Burial will be at the East Line Street Cemetery in Bishop. A reception and luncheon will follow at the VFW Hall at 484 Short St.
Born Feb. 25, 1933 in Shelby, Ohio to Russell and Bertha Wolf, Martin died at his home Sunday, Nov. 29, 2009. He was 76.
Many remember Martin as the Biker Philosopher, having made numerous contributions to The Inyo Registers religion section.
You will never get credit for what you didnt do and you will get very little credit for what you did. So for now, what are you going to do is all that matters, as far as Im concerned, do it for the right reasons and let it go at that, Martin said.
Martin graduated from Richard County High School in Ohio. He joined the U.S. Marine Corps after high school and fought in the Korean War. After the war he attended Embry-Riddle Aeronautical Institute, graduating in 1958 with a degree in airframe and power plant design. Martin was employed by Transworld Airlines from 1962-1966. He then became a professor of aviation at Los Angeles Community Collage where he taught for 25 years.
In 1996 Martin married his devoted wife Gayla, with whom he shared his retirement from teaching. In 1998 his doctor gave him two years to live due to stage 4 cancer, complicated by heart disease. While Martin described himself as no hero, he conducted a heroic effort to survive. After one bout of cancer requiring hospitalization this past year, he rode his Harley Davidson with its sidecar with Gayla to Yuma, Ariz. for a gathering of fellow bikers. One person describes Martin as a tough guy and a tender friend.
He is a lifetime member of the VFW, American Legion, E Clampus Vitus and the National Rifle Association.
Martin was also a member of Our Lady of Perpetual Help Catholic Church in Bishop.
He is survived by his wife, Gayla; sons, John, Lawrence, Winston and Martin, Jr.; daughter, Madeline Trone; brother, Frederick Wolf; nephew, Michael Wolf; niece Karin Schwan; grandchildren, Thomas Trone, Cameron and Oliver Wolf; stepchildren, Steve and Kim Hachenberger and Heide McDonald; stepgrandchildren, Natalie and Claire Hachenberger, Trevor and Emily Hachenberger and Carolyn and Clayton Fowler.
In lieu of flowers, donations may be made to the Eastern Sierra Breast Cancer Alliance, P.O. Box 11523, Bishop, CA 93515 or the VFW, 484 Short St., Bishop CA 93515.

We work to provide daily news to all of the Eastern Sierra, in the tradition of Eastern Sierra News Service and the Sierra Wave. We bring you daily happenings, local politics, crime, government dealings and fun stuff. Please contact us.
View all posts by News Staff →
Todds and Ends: St. Margaret’s at Bishop
CA Chips in $20 Million Toward Digital 395 Project