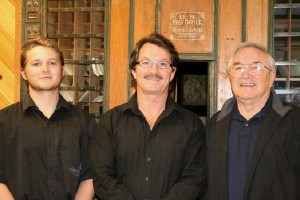 It was in 1983 that Title Insurance Company sold its Inyo-Mono operations to the Core family. Father and son team, Jim and Jerry, and their wives, Jo and Debbie, named their new company Inyo-Mono Title. This photo, from right to left, shows Jim, Jerry and Jerry’s son Tyler, who has also joined the family operation.

According to the TI website, Jim had gone through the ranks of Title Insurance starting at the age of 18 in Ventura. He managed various T.I. operations throughout California. Jim’s son Jerry started his career at 18 with T.I. also. In 1984, the Cores moved their company to Mammoth with an escrow branch in Bishop. Then in 1990, Jerry moved to Bishop and Jim retained the office in Mammoth.

In 1995, Inyo-Mono Title bought their competition, Chicago Title. The Cores moved their operations to the former Forest Service Building on Bishop’s Main St. in 2004.

Many business people were helped by Jim Core. He touched many lives and aided many creative enterprises in the Eastern Sierra, including KSRW. He had become chronically ill in recent years and died last Saturday.

We work to provide daily news to all of the Eastern Sierra, in the tradition of Eastern Sierra News Service and the Sierra Wave. We bring you daily happenings, local politics, crime, government dealings and fun stuff. Please contact us.
View all posts by News Staff →
Animal Planet Show Means TV Exposure for Mammoth Lakes
New Cell Tower Helps Save Three Lives in Death Valley