A woman who inspired the Eastern Sierra and all who knew her died the afternoon of February 9th at Carson Tahoe Regional Medical Center.  Jill Kinmont Boothe would have been 76 on February 16th.   She left behind her husband, John, other relatives, and a host of admirers who loved her.

Now, she will be remembered in graveside services at E. Line St. Cemetery in Bishop on Saturday, February 18,  at 11am.  Family are working on details for a reception following services.

As an 18-year-old, Jill had won the National Women’s Slalom championship and was headed for the 1956 Winter Olympics in Italy.  During a Snow Cup race and high-speed giant slalom in  Alta, Utah, Boothe hit an icy bump and crashed.  She broke her neck and suffered severe spinal cord injury which left her paralyzed from the shoulders down. 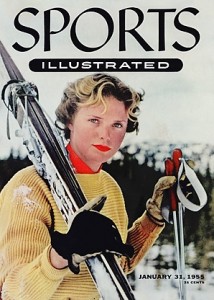 Jill Kinmont Boothe appeared on the cover of Sports Illustrated the same week of her accident.

Some might note the “Sports Illustrated Curse” as Boothe was on the cover that week in late January. She was inducted into the National Ski Hall of Fame in 1967.

What seemed a tragedy was really the start of Jill’s life of strong character in the face of limitation.  She attended UCLA and graduated with a BA in German.  She gained her teaching certificate at the University of Washington and taught remedial reading near Seattle, in Beverly Hills and then in Bishop.  Boothe became an accomplished educator who touched countless lives in a memorable way.  She also developed her skills as a painter.  The Bishop community expressed their appreciation for Boothe when they named the local continuation school the Jill Kinmont Boothe School.

Boothe and her life story were so inspiring and interesting that a book was written and two movies were made, “The Other Side of the Mountain” and “The Other Side of the Mountain Part 2”.  Jill married John Boothe in November 1976, and the couple made their home in Bishop.
Jill was one of those remarkable people who took what seemed like a tragic fate and transformed it into a beautiful life that inspired anyone who even knew her even briefly.