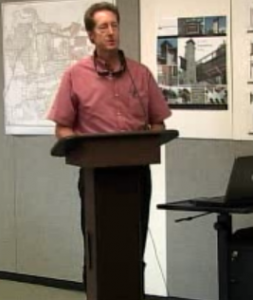 Still countless numbers of trees, blown down by a fierce windstorm at the end of last November, lie on Forest Service land in Reds Meadow.  Major clean-up efforts did clear the road to Reds Meadow Valley at the end of June with repairs of some campground damage and blocked trails.  The Forest Service now stands ready for the final project – efforts to salvage downed trees on 220 acres next to Devils Postpile National Monument.  Mammoth District Ranger Jon Regelbrugge laid out the details to the Mammoth Town Council Wednesday.

Going somewhat beyond an official press release, Regelbrugge explained that the “sheer volume of downed trees fuels a risk to public safety.”  He said all those trees could contribute to a “catastrophic fire.”

A helicopter company has been hired to haul out lumber in hard to get to areas and the trees will go by truck to Sierra Forest Products.  Regelbrugge estimated that the trees will add up to 3.5 million board feet.  He said the contractor wants to get most of the work done this fall.  Logs will be in better shape if they don’t spend the winter under snow.

The Forest Ranger said truck traffic will amount to the biggest impact to Mammoth.  He said the work will start next week.  Regelbrugge said there will be “an unprecedented amount of activity.”

The Forest Service does plan to keep Reds Meadow Valley open during this work. The press release on this project said that visitors to Reds Meadow are “urged to not enter areas where tree removal work is in progress and to drive slowly on the Reds Meadow Road.”  Visitors should expect short traffic delays while loaded log trucks travel the single lane portion of Reds Meadow Road.

Good news is that “Friends of the Inyo” won’t have a shortage of barricade material!

Why not drop a few somewhere so the public can have some. In these trying times, could help a lot of people stay warm.