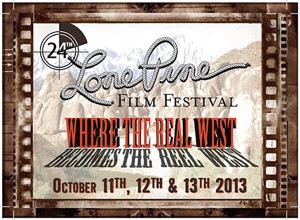 “Lone Pine, Where the Real West Becomes the Reel West” is the theme for the 24th Annual Lone Pine Film Festival being held October 11-13, 2013. The theme pays tribute to the magnificent landscape of the Eastern Sierras and the Alabama Hills west of Lone Pine.

A diverse group of actors who graced the silver screen in films shot in our backyard will be joining us. Emmy Award winning actress Mariette Hartley may be best known for her series of Polaroid commercials with James Garner in the 1970s and ‘80s, but it is her work with Randolph Scott and Joel McCrea in Ride the High Country that brings her to Lone Pine this year. Clu Gulager’s 50-plus year career in television is highlighted by two NBC Western series in which he co-starred, The Tall Man and The Virginian. LQ Jones worked in Lone Pine with a number of Hollywood legends including Randolph Scott, Audie Murphy, Joel McCrea and Steve McQueen. As a child actor, Billy King worked in Lone Pine in three Hopalong Cassidy Westerns in late 1930s. Dean Smith began his stunt career in Lone Pine on The Law and Jake Wade in 1958, and ended it in Lone Pine working as a stunt man on Maverick, in 1994. Andrew Prine, still active after more than 55 years making movies, joins us once again after an absence of several years. Lone Pine’s sweetheart, Peggy Stewart, a major leading lady from the heyday of the B-Westerns and serials in the 1940s and still working today, will be with us again this year. Diamond Farnsworth, who has been involved in numerous films and TV series, most recently stunt coordinator on the show NCIS, teams with Loren Janes, stuntman and the long time stand-in/stunt double for Steve McQueen to round out or confirmed guest lineup.

These celebrities will join with noted film critic and TV personality Leonard Maltin and western historian Ed Hulse who will be hosting our celebrity panels,  where they will share first-hand stories and memories of their colorful careers working with legends like John Wayne, Randolph Scott and Hopalong Cassidy. In addition, David Rothel, who has authored over 20 western books including Who Was that Masked Man? The Story of the Lone Ranger and Sidekicks, will present programs discussing his works published by the Lone Pine Museum of Western Film History.

And true to our theme  “Lone Pine, Where the Real West Becomes the Reel West,” the museum staff will bring you 15 exciting location tours including four new ones – Arches of the Alabama Hills, Audie Murphy: A Real Reel Hero; Django Unchained and Westward Ho!. Returning to Lone Pine for the first time in 50 years, Billy King will participate in two tours, “Billy King Remembers Hopalong Cassidy” and provide commentary to Don Kelsen’s Secrets of the Wasteland tour.

The Matriarch of the family, Gypsy Bell Groat, was a child actor for MGM in the 1940s, and her father, Clifford Groat, was a director for the old silent films and early talkies at Pathé Studios. It was only natural that the family grew into their passion of celebrating and honoring the “West” and Western Culture.

Today, the American West has a certain wild image of adventure filled with cowboys, Indians, wild animals, outlaws, and ambushes. The dramatic myth of the Wild West as we see it today is really a “puffed-up exaggeration” of the real western frontier but one that audiences World Wide have come to enjoy.

The Groat Family Wild West Show celebrates the achievement of the frontier movement as being the most important accomplishment in American history – a winning combination of history, patriotism, and adventure that create an enduring spirit of the unsettled west and capture the hearts of the audience.

The show consist of reenactments of history combined with displays of showmanship, sharp- shooting, stunts ,and a vaudeville style and presentation of “historical” scenes providing for “poetic license” in presenting and embellishing upon the period action and adventure of fights, robbery’s and wild west shoot outs.

The Family began their show in 1964 providing Western Entertainment for events of all kinds and as opportunity presented itself, as actors for Western films.

As the family grew, so did their mission – today The Groat Family performers have presented over 5344 shows all over California and the West at grand openings, corporate events, festivals, parades, charities, schools, weddings and birthday parties. They have performed for major venues including Disney and Knott’s Berry Farm and other Hollywood corporations. In addition, family members can be found as actors with credits ranging from background extras to key roles.

“I see our western film history as an important part of our American roots, and one of the foundations of our artistic culture.” — Rick Groat