By News Staff on July 31, 2012 in Government Agencies/Utilities 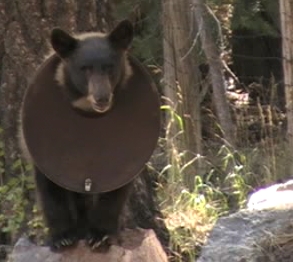 On Tuesday morning, July 31, Mammoth Lakes Police and Wildlife Specialist Steve Searles responded to a call of a bear in the 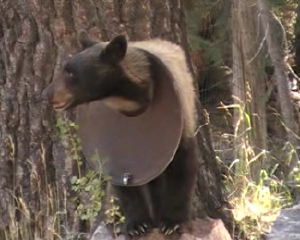 area of A Frame Liquor with a metal lid stuck on its head.  The 125 pound, 19 month old bear was found in the area of the Shady Rest tract.  It had what appeared to be the lid from a recycling bin around its neck.  The bear apparently stuck its head in a recycling bin and the lid became stuck.

The California Department of Fish and Game (DFG) was contacted and game wardens, under the direction of Lieutenant Bill Dailey, responded.  The bear was shot with a tranquilizer dart behind a house on Mono Street.  Once sedated, the metal lid, weighing in excess of 10 pounds was removed.  The bear was found to be in good health.  He was tagged and transported to a remote area and released.

Wildlife Specialist Searles said that the bear could not climb a tree or eat with the large, heavy metal lid on its neck.  It would not have survived without human intervention.

If the economy gets any worse I may get a bin lid stuck around my neck.

That bear must be on of “Blondies” offspring, with all that light colored hair and the penchant for dumpster -diving.

I dont understand as a taxpayer why our poor town pays for Steve when DFG will come in and do it for free. Kind of like a town with two town managers!

Fish and Game did not identify the problem. Steve Searles did. He is in Town and on top of scores of bear issues during the busy months. Our news coverage of Searles over the years has revealed that his work keeps bears and people out of trouble and allows the… Read more »

Chad, the only thing DFG will “do” is, they will “do” the bear – and by the way, it won’t be “for free”. I’m all for saving money and if it means a few cuts to the Department of Fun and Games to keep someone truly useful on the job,… Read more »

Chances are DFG would have “other ways” to deal with the bear….far more lethal.

Chad, Steve is the right and only one in the area that has a passion for saving our Bears. If he wasn’t involved then the bear population would be really thin here. Stve is at most every event that happens here passing out stickers or flyers to the vendors so… Read more »

Looks like he had the right idea .. get himself some body armor.

He just needed one for his butt too.