Earlier this month, fire struck a home in Mammoth Lakes.  A smoke alarm awakened an 8-year-old girl inside.  Her alert reaction, fire 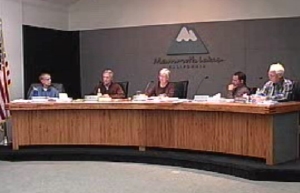 officials said, likely saved her mother, step father and family pets. At Wednesday night’s Town Council meeting, fire officials will present Hanna Babula, 8, with a plaque recognizing her bravery in that incident.  Fire officials have also made it clear that compressed logs contributed to the damaging fire.

Fire Marshall and Division Chief at Mammoth Lakes Fire Department, Thom Heller, issued a press release to say that an investigation revealed that one of the factors that led to the fire was the burning of too many compressed logs in the insert woodstove.  Heller said these logs burn at a much greater temperature than standard wood.  He said manufacturers recommend burning only one or two compressed logs at a time.

Heller said that in the past few years, the Fire Department has been called to several locations where numerous compressed logs had been inserted into stoves or fireplaces.  Heller also underscored the importance of smoke alarms that seemed to save the Babula family.

In other Mammoth Town Council agenda items, Wednesday will see a public hearing and possible adoption of the Parks and Recreation Master Plan.  The Council will also deal with a resolution which would formalize what officials call a “high level of interagency cooperation with the United States Forest Service to plan, design, implement, construct, operate, maintain and promote an integrated year-round trail network.”

The Council will also consider appropriation of nearly $344,000 in Measure R funds according to recommendations proposed by the Recreation Commission.

Before all of this, at 4pm, the Council will meet for two hours in closed session on the MLLA debt negotiations.

My boss used to live in that house and moved. He said it was a fire danger and the chimney was separating from the house. Landlord lol at him when he left. Guess we was right and Heller and the landlord are WRONG!