With the Owens Valley Committee conditions on the table, it’s now up to the other five Memorandum of Understanding partners to pick up the discussion that just may result in in the Lower Owens River Project, Phase II. 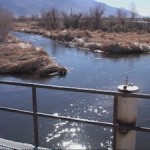 The OVC Board of Directors issued its press release Tuesday listing nine conditions. If those conditions can be agreed upon by the other five MOU partners, the organization could consider the recommended changes in the base flow and pump-back station capacity, both mandated in the 1997 Memorandum of Understanding. That’s a big step for a group that, as stated in the release, has worked for more than 30 years “to protect our valley.”

The organization’s primary concern is the Los Angeles Department of Water and Power using the Owens River as a conduit to export more water to Los Angeles.

Some of the conditions are already under consideration, not requiring any change to the existing MOU. “There are things on that list that we’d like to do whether the partners can reach an agreement or not,” said Inyo County Water Department Director Bob Harrington.

One of those conditions is to actively pursue a feasibility study on unplugging the clogs in the islands area of the Owens, north of Lone Pine and due east of the Alabama Gates. That area has developed a broad tule marsh, Harrington said. The tules are collecting sediment in a low gradient area of the river and, basically, growing an expanding series of soggy islands. The fix is either simple or complex and expensive, depending on the fixer’s point of view. The real solution, as suggested in the OVC’s conditions, is to seek grant funding for a feasibility study.

In addition, the OVC wants to see an improvement at the Alabama Gates outlet, below the islands. “There’s been a sediment build up,” explained Harrington, as well as issues with the ditch that leads from the gates to the river.

While there have been habitat improvements along the 62-mile stretch of re-watered Owens, water quality, lack of vertical tree growth and the tule invasion are not in alignment with the project goals. The MOU consultants Ecosystem Sciences have recommended for several years that those issues could improve with a more natural flow and seasonal flushing flows. LADWP has been in agreement with those recommendations, as long as the finished product is water neutral and the water is available for the flushing flows. One of OVC’s conditions is specific language define “the availability of water.” One example would be available storage at Tinnemaha.

As of last week, LADWP Aqueduct Manager Jim Yannotta and staff were working on hydrographs that would meet the recommended flows with the same amount of water laid out in the MOU Stipulation and Order. “We want the best use of that water,” Yannotta said in a phone interview, pointing out water that exceeds the current pump-back restriction flows into the Delta, south of the pump-back station. The consultants agreed the excess flow is not enhancing a natural habitat, just creating another mass of tules.

Yannotta said the department could not agree to giving up more water to the project than is indicated in the MOU. “We can improve conditions on the river by increasing the (seasonal) habitat flows,” he said.

The LORP is what it is. Intended to partly mitigate the damage LADWP has done to the Owens and its aquifer over the last half century. Their is nothing in the agreement that would prevent the City from doing better than the minimum requirement. In terms of the aquifer, the… Read more »

“Making agreeing agreeable” This quote out of contex from a man of steel, Ted Schade, came before these eyes this morning in a “story of dust” that I was lucky to see . The MOU parties have varied approaches currently circulating to similar solutions for an agreement for the health… Read more »