By News Staff on October 17, 2014 in Government Agencies/Utilities 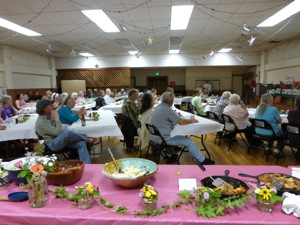 Good food was on the menu for during a community dinner and presentation by a local not-for-profit cooperative planning to re-open Mair’s Market in Independence.  Another dinner is now scheduled for Saturday, October 18 in Lone Pine.

About 50 residents of the town gathered at the Independence Legion Hall Oct. 11 and enjoyed a dinner featuring a wide variety of locally grown produce, locally made baked goods and homemade entrees.

A similar community dinner and informational meeting is scheduled for Saturday, Oct. 18, from 5 to 6:30 p.m. at Statham Hall in Lone Pine. The community meetings in Independence and Lone Pine are sponsored by the OVGC, the Independence Civic Club and the Lone Pine Chamber of Commerce.

During the evening in Independence, several members of the Owens Valley Grower’s Cooperative (OVGV) addressed the gathering and shared their plans to open a small grocery store, bakery and local foods café in the now vacant Mair’s Market building on Main Street (US 395). Four different grants have been awarded to OVGC to help get the new enterprise off the ground. The grants fund everything from building improvements to installing a certified kitchen where local residents will be able to prepare food using local ingredients.

The group asked those in attendance to fill out a survey and questionnaire that asked what kind of produce, grocery items and other goods people would like to see stocked in the new store.

If everything goes as planned, the OVGC will be opening Mair’s Market by the summer of 2015. The store will be stocked with locally grown produce, whenever possible, and feature healthy food items from California farms and ranches. The group currently leases the space. The market closed in 2006, leaving Independence and the surrounding area with no grocery store.

Julie Fought, a OVGC board member from Lone Pine, highlighted the group’s successes to the gathering. She noted that the OCGC has operated Farmer’s Markets on alternating Fridays in Independence and Lone Pine for more than a year. Those markets have allowed local growers to sell their produce and other products to local customers, she noted, which has kept those dollars in the local economy. Expanding the Farmer’s Markets into a store which would offer a larger and more diverse selection of healthy food would make shopping more convenient for local residents and also help the local economy by keeping those shopping dollars local and adding jobs, she said.

Although the store would be a community based cooperative offering memberships, it would still have be operated like any other business, and provide a good product for a good price, said OVGC Board Member Ben Holgate, of Independence. The group is also exploring other “community supported agriculture” models, such as a local beef CSA, which would allow community members to pool their money and buy local beef, for instance.

For more information on the Owens Valley Growers Cooperative, find them on Facebook, email [email protected] or call 510-468-7113.

It’s a good idea. The town of Caliente Nevada formed a non profit to re-open a closed JC Penney store so residents wouldn’t have to drive all the way to St. George Utah for the sort of merchandise a JC Penney sells. Local communities very much need at least one… Read more »

Kudos to these local citizens for stepping up to create something good for their community! Very impressive! Good luck on what sounds like a great idea.

We fully support this effort and the wonderful town of Independence. the best is yet to come.
PeterCampiglio