By News Staff on November 25, 2012 in Government Agencies/Utilities 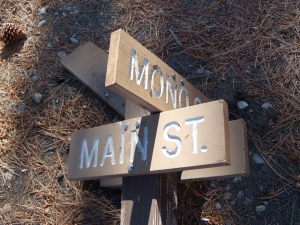 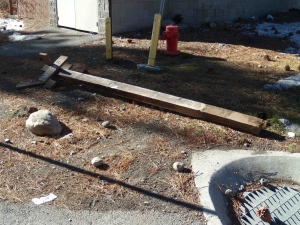 The Mammoth Lakes Police Department is investigating multiple vandalism to street signs and snow stakes that occurred overnight on Friday, November 23.  A total of 29 snow stakes were discovered bent over with some of them in traffic lanes.  The majority of them were on Main Street east of Minaret.  The others were near the Village on Hillside, Canyon, Minaret, and lower Lakeview.
In addition to the bent snow stakes, a wooden street sign at Mono and Main Streets was removed from the ground and broken.  The post on another street sign at Mono and Dorrance was broken in two and a stop sign at the same corner was removed from the ground and lying in the street. 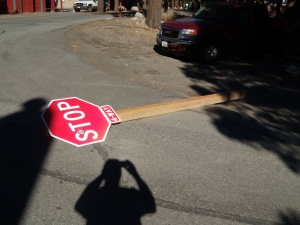 community.  This latest bit of vandalism is an increase of what has occurred in the past.  Some of the stakes can be repaired and others will have to be replaced.  This vandalism is not only costly to repair, but also poses hazards to motorists and pedestrians.

Anyone with information about these acts of vandalism should contact the Mammoth Lakes Police Department at (760) 934-2011.

We work to provide daily news to all of the Eastern Sierra, in the tradition of Eastern Sierra News Service and the Sierra Wave. We bring you daily happenings, local politics, crime, government dealings and fun stuff. Please contact us.
View all posts by News Staff →
Community Hispanic Advisory Committee Town Hall
Inyo Clerk goes the distance to help voters
10 Comments
Newest
Oldest Most Voted
Inline Feedbacks
View all comments

somebody knows something,turn them in,they want to be stupid and destroy public property,send the punks to compton

We don’t need no stinking drunks!

I say the vandalism is directly related to the drunks not being able to ride the shuttle home from the bars. Instead they have to walk which gives them the oppertunity to take their frustration out on the town.

….”The Police Department has previously received complaints of bent snow stakes and broken signs in the Sierra Valley Sites community. This latest bit of vandalism is an increase of what has occurred in the past.” So……now that the problem has gone past the borders of SVS, only now it is… Read more »

And no, I am not really “happy” for the increase in the vandalism…..I speak out of complete frustration that individuals get their kicks out of the act of destruction at the expense of other peoples safety and the town’s money (to fix and/or replace). The responsible individuals need to be… Read more »

Drunks walking home from The Village.

This repeated yet unsolved vandalism keeps occurring with MLPD fully staffed up prior to any cuts being made, so obviously budget cuts have zilch to do with this. If anything your comment raises the question of whether we’re getting our money’s worth at current staffing levels. Suggest that it would… Read more »

Interesting implication that lower staff levels at MLPD may reduce vandalism. I like your logic….