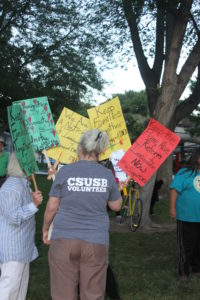 The crowd of more than 150 included supporters of the Deferred Action for Childhood Arrivals as well as those impacted by the policy initiated by the President Barak Obama administration in 2012. Those who gained legal status through the policy are now threatened by Donald Trump’s announcement the policy will be scrapped in six months.

The working theory is Congress will pass some form of protection for those brought into the country as minors before the policy expires. Since Congress hasn’t been able to do that in the last five years, the Dreamers, as they were identified by Obama, face an uncertain future.

The rally was organized by INYO350, the Sierra Club and others. Postcards were passed out and those in attendance were encouraged to send a clear message to Rep. Paul Cook: save the Dreamers, give them a path to citizenship. 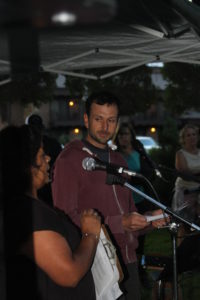 Stephen Muchovej and Virginia Figueroa. Stephen provided a short background on DACA; Virginia served as the rally’s Spanish translator for most of the speaker and told her own story during last Wednesday’s rally.

Stephen Muchovej opened the rally with background information on DACA, ending with a call to “fight to keep the Dreamers here.”

Virginia Figueroa, who also served as Spanish translator for most of the speakers, told her story, a life transformed by DACA. She came to the country as a child unable to speak English. The 2012 policy opened up new job opportunities, she enrolled in Cero Coso Community College, bought a home, provided a good life for her son and now watches as “the dream is crumbling.”

Deanna Deanna Campbell, director of the Eastern Sierra College Center, assured those in attendance the California Dreamer Act would continue to provide scholarships to those impacted by DACA’s possible repeal.

Supervisor Jeff Griffith delivered his contribution to the rally in Figueroa-assisted Spanish and English, pointing out what made Owens Valley “values” unique. “We’re a frontier,” he said. “We’re more united, more integrated because we’re forced to be. Our kids and some of us have gone to school with Dreamers. We work with Dreamers, we stand in line at the grocery store with Dreamers. We all benefit from Dreamers.” 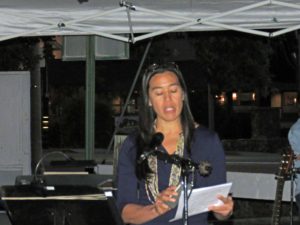 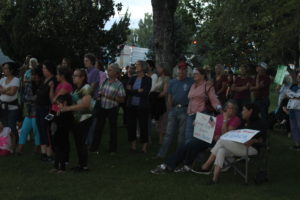 The final speaker, Jose Garcia, emphasized the importance of the Dreamers to the country and county’s economy, ending with a call to both voice support and vote.

The most recent DACA news on the national level appears to hold the Dreamers hostage in exchange for the border wall.

Trump and tha 4th Reich already have the RX84 FEMA Detention Center network in place ready to do its job of draining the swamp, tha Community Policing Stalker Watchers already have all the dreamers families under 24Hr surveillance, until tha Big Roundup.

Like I try to tell my Mexican-American friends,nothing here to really worry about….it ain’t a gonna happen…just all trump-talk and trying to shoot down anything and everything President Obama accomplished during his years in office…if that idiot were to try to initiate kicking 800,000 people out of the U.S. of… Read more »

Low-Inyo , Please name all of those things Obama accomplished during his years in office !

I totally agree. However, whatever Trump SAYS, gets the left all upset, with their panties in a bunch, and then they go on their rant. When are we going to learn, that we have heard a lot of WORDS from both sides and little action on anything…Show me one law/item… Read more »

YEP LOW-INYO We have heard it before , You said that TRUMP would never be ELECTED. Remember, Your crystal ball needs a CLEANING. lol

INYOFACE….trump didn’t win…Hillary lost…and now,going on 11 months,we’re all seeing what a “good” decision it was to select this clown as the lesser of two evils…. an embarrassment to this Country,with the whole World laughing at us now…as well as many right here in the U.S. of A. doing it… Read more »

Almost; you are right they have been here a long time but they should have never been here at all. If you want to place blame their parents shoulder all that blame. I am not a fan of the government but the law is the law, I follow the law… Read more »

Jay, I hate the effects of illegal immigrants. But, I’m not going approve of what you seem to approve of. It’s cruel.

It was once expedient for our government to not enforce the employment laws when we needed cheap labor …now their children are being used as political pawns to fire up the anti immigration base. We have educated almost 1 million children to only expel them to Mexico and other countries?… Read more »

People, I think you should all consider what we are suggesting our federal government be allowed to do to these kids.We or our kids are probably friends with several of these families that have been here a long time. There are 800,000 kids here under this status officially. None of… Read more »

Almost Native, no duh, that’s why this is such a hot topic.
Tell us something we don’t know.

Tinner, I think there are times in our life when you you need to pick a side . I’ve made prejudice jokes and even believed in some of them. But I’m not going to be a part of going after women and children.

Give me A Break..

The way I figure it, if your Native American, your the only one that has a right to complian.

Most of our great grandparents went thru this same problems.

A lot of Americans are pro DACA, maybe most, I know I am. I know many Dreamers in this town and if somebody tried to deport them I’d fight for them to stay. However the era of immigrants (from Mexico, anyway) being gracious and thankful to be in this country… Read more »

I think rescinding DACA is absolutely necessary, though not popular. Obama was wrong for signing DACA and he knows it. He won’t admit it but he knows it. He basically said it before he signed it. Trump is simply doing exactly what he said he would do “put America first.”… Read more »

This is Nazi propaganda.

This article promotes the lawlessness of flouting American sovereignty and insults immigrants who play by the rules. It is illiberal, dishonest, and irresponsible.

Other than that, nice work.

Take your education and experience and go back to your home country and make it better. Stop crying and follow the rules. If it’s so important to be in the US apply for citizenship like others seeking a life in the US.