“IOU THEATRE”
A series of radio plays in Lone Pine this summer
starting June 15, 2014 at 7pm 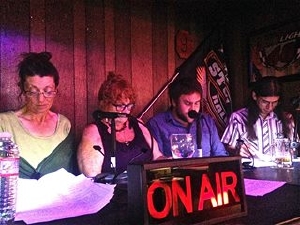 WHAT:  The Metabolic Studio will host “IOU THEATRE” this summer and present a series of radio plays that have relevance to the Owens Valley at the Double L bar on Main Street.

The radio plays will also be broadcast live in the Metabolic Studio IOU garden and on the internet at:  kppglive.org

There will be an Open House in the IOU garden from 5pm – 7pm prior to each performance. A refreshment from the IOU garden will be served inside the Double L bar.

WHERE:  The Double L bar is located next door to the Metabolic Studio IOU Garden – corner of Main and Willow Streets in Lone Pine.  The IOU garden is a working garden and community commons that hosts weekly “Owens Dry Lake Bread” baking on Fridays, monthly conversations in the “100 Conversations about Water” series, special events focusing on community resiliency and the growing local food movement, and a local farmers market on alternating Fridays from 3pm – 7pm. (The other farmers market location is at the Owens Valley Growers Cooperative in Independence.)

WHEN: The IOU THEATRE summer radio plays schedule is as follows:

Sunday June 15, 7pm – “Man Against the Mountain” (1947). How the Lone Pine community funded and built the Mount Whitney trail and observatory in time for the passing of Halley’s comet on April 20, 1910.

July DATE TBA, 7pm – “One Hundred Yards Over the Rim” (1961) – The script from a Twilight Zone TV episode, which was originally filmed in Olancha dunes. A pioneer from a wagon train in 1847 sets off to find a cure for his ill son and stumbles into 1961 Olancha. Presented with permission from the Rod Serling Memorial Foundation.

Sunday August 10, 7pm – “Dust” (1961) – The script from a Twilight Zone TV episode whose title evokes the dust that blows from the Owens dry lake bed. In a small, western town, a desperate father begs for clemency as his son is slated to die for a fatal accident which killed a young girl. As the son’s final hour draws near, the father is approached by a salesman, who offers to sell him ‘magic dust’ that will evoke the townsfolk’s sympathy. Presented with permission from the Rod Serling Memorial Foundation.

NOTE: Monthly Open House in the IOU garden from 5pm – 7pm before each radio play.

WHO:  The Metabolic Studio of Los Angeles with IOU theatre members from Bishop, Big Pine, Independence, Lone Pine and Darwin.

Metabolic Studio is the studio of Lauren Bon where she works with a team to explore and experiment, transforming resources into energy, actions and objects. Derived from the Greek word for change, ‘metabolism’ is the process that maintains life. In continuous cycles of creation and destruction metabolism transforms nutrients into energy and matter. The studio projects often take a natural resource as currency and turn it into social and cultural capital.  At the heart of Bon’s wide-ranging practice are ‘devices of wonder’ that include actions, performances, temporary and permanent objects and durational processes that have a catalytic and transformative effect on the sites in which she operates in the southern region of the Intermountain West.

IOU Garden: The establishment of a garden and community center focusing on the distribution of locally made soil on Main Street, Lone Pine as a symbol and act of reconciliation in the Owens Valley. Since the building of the LA Aqueduct in 1913 the valley has slowly lost not only its water but also its productive land and people. The soil creation scheme and the garden have not only nurtured a culture of growing in the valley but have created social capital. Managed by a group of local volunteers, the projects have established a currency of time and trust within a community network that has grown in strength and number.

HOW MUCH: Radio play readings are FREE and open to the public – must be 21 and over to enter the Double L bar.

We work to provide daily news to all of the Eastern Sierra, in the tradition of Eastern Sierra News Service and the Sierra Wave. We bring you daily happenings, local politics, crime, government dealings and fun stuff. Please contact us.
View all posts by News Staff →
“Uncharted territory” for bears and people
Mammoth recreation from Stu