On the Mammoth Lakes political scene, some candidates have started to snark at one another about development – the perennial push and pull among residents. With a ragged economy in town and a loss of jobs, the arguments over building heights, developer fees and affordable housing take a back seat to survival although a certain part of town carries the banner for more 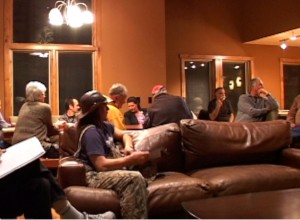 Group called Future of Mammoth of Lakes kicked around issues of government spending and marketing.

out of developers instead of less.

As eight Town Council candidates lined up for three seats, talk grew more public. A more or less formal group of two dozen or so started to meet and call themselves Future of Mammoth Lakes. Their March meeting touched on the new marketing organization, the utility tax, and transient occupancy rentals. Their April meeting takes place Tuesday night at Base Camp Caf at 6:30pm. Just one topic for Tuesdays talk – Measure U, the new Utility Users Tax that goes on the June ballot.

Some candidates have said the Town Council seems to want to make plans for Measure U revenue even before the election determines the future of the tax. Tuesday, the special group will talk about Measure R and the new Measure U.

Members of the group have named the town budget, how the Town Council spends money and a lack of marketing as some of their issues. Their meeting Tuesday is an open one for those interested.

We work to provide daily news to all of the Eastern Sierra, in the tradition of Eastern Sierra News Service and the Sierra Wave. We bring you daily happenings, local politics, crime, government dealings and fun stuff. Please contact us.
View all posts by News Staff →
Cottonwood Plaza Falls Out of One Escrow and into Another
Bureaucrat Beat: TV Nobodys, Objectivism, and Derelict DMV