LMNO productions spent many months in Mammoth Lakes with Steve Searles to shoot new episodes of the show, The Bear 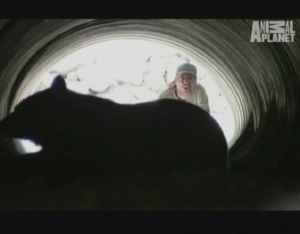 Whisperer, that airs on the Animal Plant Channel. The latest news says at least three new episodes will air this spring with the first new show on TV April 7th.

Last year Animal Planet aired a two-hour special called The Bear Whisperer. Ratings went high and so the channel negotiated a follow-up series. The shows feature Mammoth Wildlife Specialist Steve Searles and how he manages the bear population in and around the town.

The adventures in the new series re-visit some familiar bears who return to Mammoth every year like Ace and Half-Nose. According to a press release, other Shows highlight bear cubs, big bears and the Blondie incident.

We work to provide daily news to all of the Eastern Sierra, in the tradition of Eastern Sierra News Service and the Sierra Wave. We bring you daily happenings, local politics, crime, government dealings and fun stuff. Please contact us.
View all posts by News Staff →
Bureaucrat Beat: Hong Kong internet, FAA fax, and gasoline mania
Let the RecStrats begin