What looked like a huge 747 commercial jet circled round and round and back and forth in the southern Inyo area this morning. Residents called us about it. They said it was a puzzling sight. 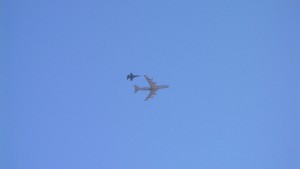 Officer Robinson said the strange sight could also have been a military C17 from another location. Sierra Wave sent images of the plane to the officer who will try to identify them and let us know what was up with the unusual figure eights and circling of the large plane around Inyo County.

Other reports weeks earlier had said air force personnel on the ground were conducting an exercise with planes in the air. LeMoore Air Force Base officers had reported on that type of activity when they appeared before the Inyo Supervisors about a year ago.

The Owens Valley is an official military air space in which a number of military planes perform maneuvers.