News from a different commission in Mammoth, where image does count. The Public Arts Commission will go to work to create a new gateway entry monument to replace the current sign on Highway 203, described as "plain." 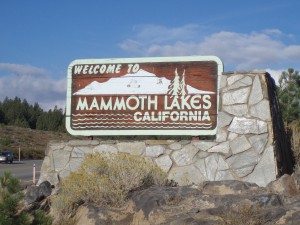 The Public Arts Commission will come up with a new design, and they want help. So, they have scheduled a public workshop for Thursday, October 11th in Suite Z at 4pm.

A third brainstorm – a number of smaller artistic monuments that represent Mammoth – bears, fishing, skiing, you get the picture.

Chairman of the Public Arts Commission, Paul Jurewitz, is quoted as saying he thinks the monument should promote a "sense or arrival." A show stopper, in essence.

Have an eye for the dramatic? The workshop – October 11th, 4pm, Suite Z.

We work to provide daily news to all of the Eastern Sierra, in the tradition of Eastern Sierra News Service and the Sierra Wave. We bring you daily happenings, local politics, crime, government dealings and fun stuff. Please contact us.
View all posts by News Staff →
YouTube Video Suspect in Court
Southern Inyo Residents Argue Against Water Rate Hike