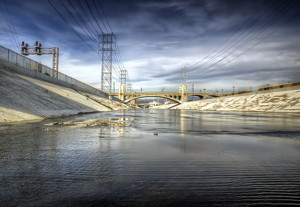 Helicopters whirling overhead were nothing new to residents who live near the banks of the big, gritty, graffiti-covered concrete channel that holds what is left of the Los Angeles River.

Police choppers regularly patrol the river through the rough side of town looking for graffiti artists “decorating” the concreter river. Maybe the whirly bird was on a movie shoot — remember “Grease” or “Terminator II”?

The officers in the helicopter that June day in 2008 were not part of a Hollywood movie (but they hit the big screen as part of the documentary, “Rock the Boat,” which is coming to Lone Pine on Saturday). Nor were they using their bullhorn to bark out orders intended to chase away vandals.

They were in hot pursuit of a bunch of kayakers who were casually and illegally floating down the meager flow of water that made up the “river.”

Yep, outlaw kayakers. Troublemakers who thumbed their paddles at the law, regardless of the consequences, which were severe for one activist, who got in enough hot water with her bosses that she was fired.

The paddlers were “casually and illegally” floating down the river because the water wasn’t moving very fast, and because ever since the concrete walls replaced the river’s banks in the 1930s, it had been illegal to float, walk, ride a bike or enter what was officially defined as a flood control channel, not a river.

The group of about a dozen boaters had decided there needed to be a change in how the federal government defined the Los Angeles River, and how the people of LA were allowed interact with their river. When the self-named LA River Expedition 2008 couldn’t get a permit from the U.S. Army Corps of Engineers, they held a press conference before launching their craft, and released the following statement:

“The Expedition takes the stance that public trust law in California contains certain inalienable rights of access to the waters of the U.S, and that these time-honored, common sense laws supercede all bureaucratic misgivings, justifications and obfuscations regarding the denial of our request.”

With that declaration still floating in the air, they put their boats in the water and the chase was on. That chase is still going on. Today, thanks in part to the publicity and notoriety of the renegade flotilla, the Los Angeles River has once again been declared a “river.” Or at least a “traditional navigable waterway,” which is bureaucrat-speak for “river,” a title that carries with it legal protections and opportunities for 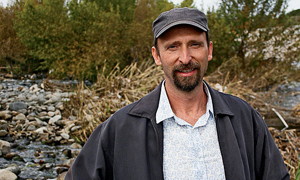 George Wolfe led the motley group of paddlers 52 miles down the Los Angeles River, a trek documented in “Rock the Boat.” He’ll be at the Lone Pine screening of the film on Saturday.

That rather incredible journey, for both the kayakers and the river, has been documented in the aforementioned, award-winning film, “Rock the Boat.” The documentary will be shown to the public free of charge on Saturday, Oct. 5, at 7 p.m. at the Lone Pine Film History Museum, on south Main Street. For information, call 760-878-0258. A discussion will follow with director Thea Mercouffer and ringleader of the 2012 expedition, George Wolfe.

Then, on Sunday, Oct. 6, the pair will join a group of local river-runners for a float/kayak trip on the Owens River Sunday morning. The seven-mile Owens River trip will last about three hours and will start at Elna Road, just below Tinemaha Reservoir, and end at the Aberdeen Station Road. For information, call 760-878-0011.

The movie is not a typical, dry documentary (pun intended).

Wolfe came to Los Angeles and started satire website that poked fun at everything LA, including the alleged river in the concrete channel. “But I’ve come to love the bizarre L.A. River. You’ve got manmade monstrosities beside age-old nature,” he said in a previous interview. “Less than a mile from one of the busiest freeway intersections in the world … you’re paddling amid sycamores, willows, grapevines and egrets.”

The goal of the 52-mile, three day river trip was to challenge the Army Corps contention that the river was not “navigable,” thus not a river that should be protected under federal law. And the group did indeed make it all the way to the ocean, and they did indeed churn up a considerable number of waves.

The first paddler to get swamped was Heather Wylie, who worked for the Army Corps, and disagreed with the corps’ “not-a-river” definition. She was threatened with a suspension, which prompted legal action and plenty of publicity, and eventually lost her job.

The whole trip is documented in the film, which takes a light-hearted, but clear-eyed look at the history of the river, its long slide into obscurity and the current revival taking place along its banks.

The compelling story, the interesting cast of characters, from the guerilla paddlers to earnest politicians to stern Army Corps officers, and the eventual victory in getting the river defined as a river, have made the film a multiple award winner. It claimed the People’s Choice Award at the 2012 Wild and Scenic Film Festival, among other honors.

Scenes of massive river flooding, showing blocks of soggy homes and cars up to their doors in floodwater, make it easy to understand why the river was tamed and channeled into a concrete chute. Recent man-in-the-street interviews reveal that a river buried in concrete for 80 years had also become buried in the city’s collective consciousness, since quite a few LA residents didn’t even know the city has a namesake river.

But in the 17 miles of “soft bottom” the scenes shifts to show trees, and birds, and kayaks skipping through whitewater; here the river reveals what it used to be like, and what many want it to become. And today, there’s a chance the Los Angeles River will once again become a free-flowing waterway, inviting paddlers and anglers and water lovers to enjoy the simple pleasures that come with spending time on a real river.

And not be hassled by the cops in a helicopter while doing it.

George Wolfe KCET: George Wolfe led the motely group of paddlers 52 miles down the Los Angeles River, a trek documented in “Rock the Boat.” He’ll be at the Lone Pine screening of the film on Saturday.

Heather Kayak: Concrete and graffiti are the most recognizable aspects to the Los Angeles River today.

We work to provide daily news to all of the Eastern Sierra, in the tradition of Eastern Sierra News Service and the Sierra Wave. We bring you daily happenings, local politics, crime, government dealings and fun stuff. Please contact us.
View all posts by News Staff →
“Reel West” Film Festival in Lone Pine
Pollution Health Advisory issued for Bishop and south