Picture this: a pipeline from either the Owens River or the Lower Rock Creek gorge up to reservoirs on Wheeler Ridge with an adjoining slue from the ridge back down to reservoirs in the gorges. Is this a water slide gone mad or a hydroelectric project waiting on a preliminary permit from the Federal Energy Regulatory Commission? 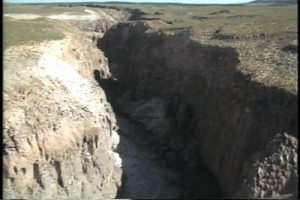 If you guessed the latter, you’re right.

Premium Energy Holdings, LLC out of Walnut is the mastermind behind this project which begs the question: has the company ever met the Eastern Sierra?

The application went to the FERC in late March. The cynics at last week’s Inyo County Water Commission meeting thought the project laughable at best, a scam at worst. One key may be on the final page of the application. The estimate on the cost of the project study is $5 million which would come from Premium’s “available funds” and through investors.

None of the local interested parties were directly informed. Mono County found out indirectly, according to Wendy Sugimura, Mono’s economic development head. Inyo National Forest Supervisor Tammy Randall-Parker sent a letter last Thursday to Premium reminding the company the “elements appear to be proposed in the John Muir Wilderness” and referring managing director Victor Rojas to the appropriate website.

The Los Angeles Department of Water and Power is not involved, according to Sugimura, nor was it on the list of interested parties. That omission was probably a mistake since LADWP has had water rights on the Owens River water since 1903.

Premium has developed two alternatives each to be built out in three stages: a series of reservoirs on Wheeler Ridge supplied by water from either Rock Creek, with three reservoirs created by dams in the creek gorge, or the Owens River, again with three reservoirs sitting behind dams in the gorge. Water would be pumped to the Ridge reservoirs, then sent back down to new power plants adjacent to a proposed transmission line. Premium describes the system as a “closed loop.”

Premium’s application is limited to preliminary studies that include land surveys, test pits and core holes. Temporary access roads to the ridge and both Lower Rock Creek and the Owens River gorges will be required as part of this initial project study.

While the whole project seems far too ridiculous to get through the FERC, it’s worth keeping an eye on.

The citizens of inyo/mono counties have been through the ringers enough, we will not allow this counting br ruined again. Remember MONO LAKE!

FERC will dismiss the application because it cannot issue a preliminary permit to a project in a wilderness area.

How will all this far flung infrastructure be built cost effectively to withstand earthquakes, fires, wind etc?

Mman, Hyperbolic cliché pronouncements do nothing to discuss the merits of this terrible proposal . I would rather hear facts, figures from you like, where are they going to get the energy to pump waters up over 6,000 feet in elevation, in giant 16 foot in diameter penstocks (pipes). And… Read more »

magaman (LOL! )….gimme a break !!…so much concern for the “poor and disadvantaged” people and where and how they live…and talking of the “renewable energy project”….you know,I know, we all know,and those on “the right” know,all about the $$$$ and nothing else…”free enterprise”,money-making schemes maybe making millionaires billionaires….wanting to make… Read more »

Predictable responses from the hypocritical NIMBYs of the Left. They want their “renewable energy” to run their computers and electric razors. But when a renewable energy project is proposed in their precious part of the world they flip out. Build it somewhere else they say – where poor and disadvantaged… Read more »

Then why do you live here, Magaman with the ridiculous name? Isn’t it because you like being in God’s country? There are other ways to generate clean energy without destroying the environment. Read this: “It is not too soon for the U.S. to complete the basic development of the fastreactor/pyroprocessing… Read more »

Philip Anaya…..Good post,with good facts,even though some of it way above me…except for the parts about environmental impact this would do,and knowing no way in hell would LADWP ever accept or allow anyone or anything to tap into the aqueduct….but with “magaman’s (LOL ! )” post ,I think we all… Read more »

Mman, Would like to see the source of your misrepresentation of the local benefits to the Eastern Sierra of this proposal. First, this proposal is supposedly to provide peak hour energy to So Cal. The Owens Valley is already energy sustainable with our hydroelectric, our geo thermal and limited solar… Read more »

….magaman (LOL!)…..The local politicians are supposed to be working for us…not just into money making scams and schemes…let’s hope our local politicians aren’t the same kind of con-men and liars as the politicians they got working in and for the white house now….let’s ask the people living here in Inyo… Read more »

Instead of whining, our local politicians should be glad these folks are bringing their ingenuity and foresight to the Eastern Sierra.

This project will provide cheap energy and economic prosperity to this region.

Free enterprise at its best!

Have you been to Wheeler Crest? Or are you just sitting in front of your TV spewing nonsense?If you think this project will bring prosperity to this part of the Sierras, you are deluding yourself. The only thing that this will bring is electricity to Los Angeles at our expense.… Read more »

Fierce opposition for sure, and the proposed location is pretty offensive, but this is the reality of 100% renewable energy. Pumped storage is one proven method for storing the otherwise inconvenient generation from wind and solar. Battery technology isn’t there… Beacon got a 10MWh battery (that’s a dead battery after… Read more »

“In 25 years, the load will be even greater as we move to electric appliances and cars, compounded by population increases.”

um, no… there are limits to growth on our finite planet and we are there now. technologod is no savior.

The documents for the project are available at:

Type P-14984 into the Dockett Number box to access the documents.

Mr Jones, I would agree there is going to be a fight. Do you have a position on this? I’d like to know how this state is supposed to reach this 100% renewable goal? We as a state need to explore opportunities. For god sake most if not all the… Read more »

@Mammothite, I’d have to know more about it to have a firm opinion one way or the other. As always, the devil is in the details. But based on the history with outside investors, and the close connections that many locals and visitors have to the land, I think this… Read more »

….Like Charles O.Jones says,they’ll have one hell of a fight on their hands….remember a few years ago when that mining operation “Cougar Gold” wanted to get up and into the Bodie Hills doing exploratory mining in that Wilderness area,with their lies and promises of hiring “hundreds of locals ” and… Read more »

I think Premium Holdings LLC would have a fight on their hands that they can’t even begin to imagine.