Bishop’s Planning Commission was far more chill than City Council when it came to ordinances regulating medical marijuana cultivation and vape lounges within city limits. Both ordinances passed but with recommendations to loosen up the restrictions and remove language that was described as onerous and specious. 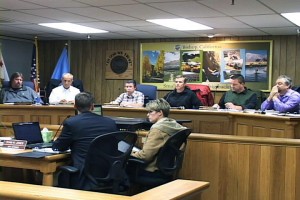 While more than two dozen proponents of cultivation were in attendance, only a few spoke during the public comment period. Alena Wagner, president of the Palace Collective which operates outside of the city limits, explained that while the collective was not impacted, she was there to represent people “who may not want to stand up here.”

To illustrate the quandary of those who choose to medicate with marijuana rather than pharmaceuticals, Jacob Wagner used the example of driving to Palmdale to buy an aspirin if Bishop chose to ban cultivation.

Charles James questioned why land use ordinances were being used to control personal behavior. The answer to that one came from City Attorney Ryan Jones. “It’s a property rights issue,” he said, “and the state has identified zoning as the regulatory mechanism.”

Jones provided three options: a total ban, a tightly restricted approval and no action in which case the city would have to follow state regulations on cultivation. According to Jones, Council members selected the two sample ordinances before the Commission. Then the Commission tore them to pieces.

Commission Vice Chair Mark Heckman led the assault calling the language in the Public Nuisance section of the ordinance “specious” when it came to odor, noise, or disruption of normal activity in the area. He zeroed in on the cultivation permitting process going through Bishop Police Department.

“That’s like having the fox guard the hen house,” he said.

The sample ordinance included a section that required permittees to sign a consent form allowing 24-hours’ notice before a BPD inspection of the grow operation.

“Doesn’t that conflict with the patient/doctor relationship?” he asked. “The police chief has the discretion to deny a permit if he thinks it’s detrimental to public health and safety. That makes me nervous.”

Jones explained that the PD was chosen as the permitting agency simply because they had the resources in terms of man power while the city’s Planning Department was nearly a one-man operation.

That one man, Planning Directory Gary Schley explained that business licenses are reviewed by the Administrative Office, Public Works, Police, Fire and Planning departments. When the issue of medical privacy laws came up, Jones said cultivation permits would not be under the same public document exposure as a business.

While a few of the commissioners wanted to extend cultivation to outdoors, the majority wanted to keep it indoors, but in 100 square feet of space, not the 25 in the ordinance.

Rather than re-write the whole ordinance Chairman Darrin Malloy opted to send recommendations back to City Council and let Jones do the wordsmithing. Considering the fact the city has only a few months to go through a Council public hearing and two reading of the ordinance before March 1, the other six Commissioners agreed.

As Jones outlined to City Council last month, the state is working on its own cultivation regulations and has given cities and counties the option to pass their own ordinances. If those ordinances aren’t on the books by March 1, state regs rule.

Malloy’s motion: adopt an ordinance with the intent that a qualified individual be allowed to maintain a licensed indoor grow operation; allow 100 square feet for that operation with the City’s administrative offices handling the licensing; follow the state criteria for a 600-foot buffer between the operation and schools and, while the Public Nuisance section has some value revocation of a grow license had to be based on nuisance calls directly related to that operation.

Next on the agenda: vape shops. Chastity and Will Logan, owners of the Vape Lounge on Main Street, questioned whether their business would be impacted or fully grandfathered in. The answer: in terms of location, they were grandfathered in but any other restrictions in the ordinance would apply.

“Does any aspect of this negatively impact your business?” Malloy asked. The answer: yes, the apparent requirement for a security guard, limits on the hours of operation and that no shades or window coverings were allowed. Interim Police Chief Ted Stec said he saw no reason to require a security guard, but the ordinance did say the guard was at the department’s discretion. Stec saw no reason to limit hours or restrict window coverings.

A majority of the commissioners were creeped out by a requirement that extensive information on employees be provided before a business license be issued.

Commissioner Hank Truxillo moved to pass the ordinance with the following changes: vape shops could have outdoor patios, no limit on hours, no visibility requirements and strike out the buffer of 1500-feet between vape shops. The only reference to employees was that they be over 18. The motion passed.

The one easy ordinance would incorporate vaping devices into the same restrictions on city property as tobacco products. The one point of contention was the same ordinance would expand the no-smoking ban to the entire City Park. The vote to approve was split 5-2 based on that item.

After a recent surgery I was given Vicodin, I will NEVER take it again. It dehydrated me and it stopped me up, I couldn’t go #2 or anything, it sucked. After days of misery, puking a yellow liquid and not being able to keep anything down a neighbor suggested marijuana.… Read more »

Ah men brother, and No zionist govt. state agencies shall keep it from u, who are They to tell human beings what can be consumed, Bible Prophecy Says the Whore Babylon and the British zionist system Will Burn Burn Burn and be destroyed by fire, looks like ISIS is fulfilling… Read more »

Just legalize it and life will go on .

Any prohibition of marijuana in the City of Bishop is a violation of the City’s Motto; “In God we trust,” which was passed in kangaroo court fashion a year or so ago. Genesis 1:29 states explicitly, “And God said, Behold, I have given you every herb bearing seed, which is… Read more »

Eastern sierra local, you’re wasting your time reciting Bible verses, many don’t believe and/or feel they are mightier than anything holy. You may even be insulting some of those individuals, believe it or not, crazy. Bob Marley believed in god, they hate it when I say that. The anti marijuana… Read more »

According to the CDC smoking is the leading preventable cause of death in the United States causing more than 480,000 each year. That’s more than all of the following causes combined. HIV Illegal drug use Alcohol use Motor vehicle injurys Firearm-related incidents So why not more smoking pot or “Vapeing”?… Read more »