The Owens Valley Mosquito Abatement Program (OVMAP) confirmed today that another mosquito sample tested positive for West Nile virus. This sample was collected in Lone Pine on August 21. This is the seventh positive sample detected in Inyo County during the 2017 mosquito season and the first ever collected in an area populated enough to be considered suburban. An eradication effort in the area where the positive sample was obtained has already begun. 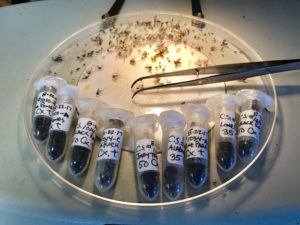 High runoff conditions jump-started a very active mosquito breeding season this year, while creating many inaccessible areas of mosquito habitat. This has taxed OVMAP resources tremendously in 2017, resulting in a July 28 request by the mosquito control agency to the City of Los Angeles Department of Water and Power (LADWP) for assistance in managing mosquito populations in areas where LADWP has spread vast amounts of water. LADWP committed to helping the residents of the Owens Valley with this issue during the August 15 Inyo County Board of Supervisors Meeting and operations resulting from this commitment are set to begin shortly.

Mass die-offs of birds, particularly corvid species such as crows, ravens, jays and magpies, can be typical with an outbreak of West Nile virus. OVMAP has received several calls from the public asking what can be done to test dead birds. The public is encouraged to contact the California Department of Public Health to report dead birds at 1-877-WNV-BIRD. 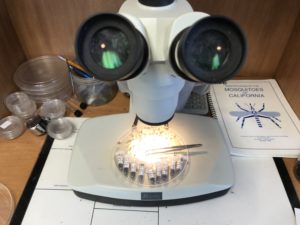 About 20% of those who are bit by an infected mosquito will experience flu-like symptoms that last a few days and resolve on their own. Over-the-counter pain medications can help reduce fever and relieve some of the symptoms. About 1 out of every 150 people who contract West Nile virus will develop more serious neurologic illness. If you develop symptoms of severe WNV illness, such as unusually severe headaches or confusion, seek medical attention immediately. Pregnant women and nursing mothers are encouraged to seek medical attention if they develop symptoms commonly associated with WNV.

With ongoing indications of West Nile virus carrying mosquitos in the Owens Valley, the public is encouraged to prevent mosquito bites by:

……….again…… POOR reporting… WHERE??? WHERE in Lone Pine??? By the river? North of Lone Pine? South of Lone Pine? Central Lone Pine? WHERE? Knowing WHERE the skeeter was found would be important… Don’t ya think? Too much to ask for???