By News Staff on July 22, 2011 in Government Agencies/Utilities

The following is a press release from Northern Inyo Hospital:

Nineteen-year-old Derek Thomas was released from the Grossman Burn Center on July 19th after being hospitalized for 11 months. Derek was involved in the August 9th multi-vehicle accident outside of Bishop that claimed the lives of four people. Twelve others were injured in the crash. Derek was brought to Northern Inyo Hospital and stabilized before being transferred to the Grossman Burn Center in West Hills California. 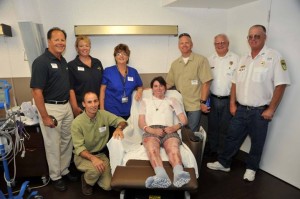 Derek was severely burned on 84% of his body, which required 33 surgeries, and 25 other procedures to allow him to be transferred to a local hospital in San Diego. Derek received over 450 units of blood, and spent 143 days in the Intensive Care Unit.

Many of the first responders who cared for Derek got a unique opportunity to see him walk out of the hospital into an awaiting ambulance to transfer him to an acute care hospital in San Diego. Sierra Life Flight, the local air ambulance service, generously flew six of the first responders down to the event. Shane Scott, a Sheriff’s Department investigator, was the first person on the scene and was one of the people who pulled Derek out of the burning vehicle. Dave Calloway and Lloyd Wilson, both EMTs from the Big Pine Fire Department, transferred Derek and another critically burned patient to the hospital that evening. Andrew Stevens, RN and the Emergency Department Manager, assisted Cindy Knight, RN in stabilizing Derek so that he could be

transferred to a Burn Center. Lisa Erwin, RN was the Flight Nurse who cared for Derek, during the hour-long trip to the Grossman Burn Center. Gary Thompson, the pilot for Sierra Life Flight flew the group down to the event, and was the pilot who flew Derek the evening of the accident.

The event was a unique and positive experience for all of the first responders, because they seldom receive follow-up on how a patient is recovering, and because few people expected such a good outcome from burns as extensive as Derek received.

What a difficult thing to imagine for most people….pulling up on a scene that was presented eleven months ago. I spent 32 years in emergency services and also was a volunteer firefighter in our small community on my days off. The men and women who serve the communities up and… Read more »

Has a final report on the crash ever been released?

Steve….If your so concerned about the “final report” on this accident,all you got to do ,to this day,is go to where the accident happened……notice the tire skid marks going off to the shoulder of the south-bound lanes….and then notice them going back onto the highway,and accross the divide and into… Read more »