Mammoth Police Sergeant Eric Hugelman went back to work at MLPD after almost two years of a fight over his termination and reinstatement. Now, his attorney in the appeal, Rob Sergi, has written an article in the PORAC magazine (Police Officers Research Association of California) this month. He tells a very different story from both off and on the record comments from Town of Mammoth officials. 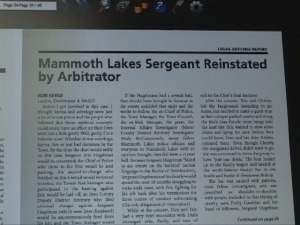 After a reported bar fight at Rusty’s Saloon in Bishop during Mule Days of 2009, Town of Mammoth officials went public with sharp criticism for Sergeant Hugelman and Officer Dan Casabian, who also went to Rusty’s that night. The atmosphere at the Mammoth Police Department at that point in time had fallen into implied scandals and questions about ethical behavior. The Bishop Police and Inyo District Attorney investigated the Rusty’s incident. The Mono DA investigated too, including a reported fight involving Hugelman at an event in Las Vegas.

At one point, the Inyo DA filed charges of disturbing the peace against Hugelman and Casabian. Casabian’s girlfriend faced misdemeanor battery but was found not guilty. Based on the Rusty’s incident, Hugelman was fired and Casabian disciplined. Both appealed.

Attorney Sergi, a retired lieutenant with the Long Beach Police Department, works in a law firm dedicated to defending police officers. Sergi tells the story that in 2009, Hugelman, his wife, Casabian and his girlfriend stopped at Rusty’s for one last drink in their day. In a standing room only crowd, Casabian’s ex-wife and girlfriend nearly came to blows, said Sergi. Sergi says Hugelman broke it up and left with Casabian and the women. Another fight broke out outside. Sergi alleges Hugelman tried to break this up and took a blow.

Sergi accuses former Chief Randy Schienle and District Attorney Investigator Wade McCammond of failure to get the facts. He further criticizes Town of Mammoth Lakes officials for accusing Hugelman of bad judgment and conduct unbecoming an officer. In fact, an arbitrator agreed and ordered Hugelman back to work with back-pay. Sergi does admit the arbitrator said Hugelman should not have gone to the bar in the first place.

The June PORAC article may amount to the end of the Town of Mammoth versus Sergeant Hugelman who now remains on the job.