By News Staff on November 13, 2013 in Government Agencies/Utilities 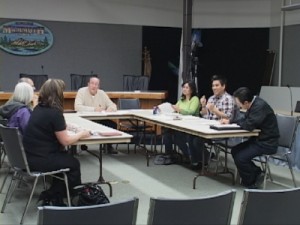 (News Release)  Mammoth Lakes Police-Community Hispanic Advisory Committee has finalized plans for the next Town Hall meeting scheduled for Friday, November 15 at 4:30 p.m.  The Town Hall meeting will be held in the Emerald Room at the Grand Sierra Lodge, 1111 Forest Trail.

Presentations will be on the following topics:

Assembly Bill 60, signed by Governor Brown, which will allow for drivers licenses for undocumented residents.

There will also be an Open Forum where questions can be asked of representatives of the Mammoth Lakes Police Department and the Mono County Sheriff’s Department.

Interpreters will be present and it will be possible for attendees to ask questions anonymously by way of using index cards.  Food will be provided and there will be supervised child care.

The Hispanic Advisory Committee was created in late 2010 in an effort to build trust and improve communications between the Police Department and the Hispanic community of Mammoth Lakes.

We work to provide daily news to all of the Eastern Sierra, in the tradition of Eastern Sierra News Service and the Sierra Wave. We bring you daily happenings, local politics, crime, government dealings and fun stuff. Please contact us.
View all posts by News Staff →
More detail on DWP-Inyo arbitration decision
Mono Supervisors bill the State for past due PILT money