California Department of Fish and Wildlife (CDFW) officers concluded an extensive deer poaching investigation out of Mono County, resulting in a guilty plea. 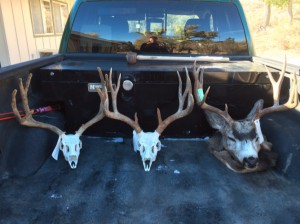 Between the tips and the follow-up investigation, wildlife officers suspected Watters of poaching very large bucks illegally, including deer taken out of season. Multiple bucks were also allegedly taken by Watters within “no-shoot” residential areas in close proximity to homes in the June Lake and Crowley Lake areas.

In addition, the legitimate hunters monitored Watter’s social media posts where he boasted of killing the large deer during extreme backcountry archery hunts.

Evidence collected at several different poaching crime scenes in residential areas yielded an abundance of excellent quality fresh deer DNA samples. Analysis of the DNA proved he took the most recent large buck in the backyard of a home without permission of the homeowner, within ten yards of the house.

Analysis of hunting tag and reporting records indicated that two large bucks were reported taken during open seasons in Fresno and Tuolumne counties, but in fact, were illegally taken during the closed season in Mono County.

“Persistent tips and close scrutiny of social media posts by legitimate hunters were a big part of this case,” said Lt. Bill Dailey, who supervises wildlife officers in Mono and Inyo Counties.

In February 2016 Watters entered a plea deal with the Mono County District Attorney’s Office for to one misdemeanor count of unlawful take of a deer and one infraction count of unlawful discharge of a weapon in a county no shoot zone.

On February 22, 2016 Watters arrived at the Mammoth Police Department where he was booked and released as ordered by the court. Watters also received a $760 fine / penalty assessment, 400 hours of community service, and cannot hunt in any state for three years.
###

This is the fourth year of California’s drought. To learn about all the actions the state has taken to manage our water system and cope with the impacts of the drought, please visit drought.ca.gov.

Every Californian should take steps to conserve water. Find out how at saveourwater.com.

Here’s an interesting share found on the California Hunting Facebook page on this subject: “California Hunting March 7 at 1:56 pm · Goleta, CA, United States · Folks, just had some very sad news brought to my attention. One of our long time followers, since the 100 follower days, has… Read more »

They should have taken his truck gun bow binos and everything else he used to poach these nice bucks!! Just like Poaching Joe these guys get a slap on the wrist then in three years get to start over again. Hunting is a privilege not a right these guys walk… Read more »

A slap on the wrist for the criminal, a slap on the face to all law abiding hunters.
Shame on the district attorney for this settlement and for future cases of poaching that may have been deterred by greater penalties.

I don’t think four hundred hours of community service is a slap on the wrist. Putting people in a cage , does nothing to help protect society. In most cases it makes things worse.

I would agree that the equivalent of ten forty hour weeks is certainly a bigger penalty than that measly fine was. But community service is not “Putting people in a cage” It’s serving the community. No cage involved. And for many law breakers, serving the community makes much more sense… Read more »

Thing about “community service”,usually means show up at 8 A.M…..pitter around for a couple hours….sit and visit a while…..then comes lunch-time….then another hour or so of doing whatever….and by 2 P.M.,at the latest, on the way home with credit for a full 8 hour day….not to mention 400 hours usually… Read more »

Lower Inyo, the guy will surely pay a bigger price in years to come just by being convicted of these crimes. I actually believe this case is a good sign that our justice system actually does work in a fair manner once in a while. I’m surprised he’s going to… Read more »

Charles, maybe I should have left my opinion of our country’s cheer leader adatude toward our prison system out of this topic. But I’m sure his attorney fees will make up for any short comings people seem to think he should of been fined.

Seems like it is cheaper to poach than to purchase a license and tags. BTW… Where is this upstanding citizen from? Crowley or June? If he is from Crowley the headline should be corrected!

Thanks for correcting the headline Bob, but the damage is done and Google News has picked up that a “June Lake” man is responsible! You definitely are the best news agency for our area, and I appreciate what you do. I know it was an honest mistake. But my hometown… Read more »

I am without a doubt pro 2nd Amendment but I guess we will have to wait until a HUMAN or a DOG of ours is killed before we take gun crimes seriously. What a pathetic penalty, a complete joke.

I can’t believe this “penalty”. If this had been in Nevada, it would cost him 4K to 5K, plus the loss of his hunting equipment, and a minimum of 10 year ban on hunting. It sure would be nice if the DA would issue a statement defending his actions. I… Read more »

Wow, I am shocked at the low fine! Seriously Mono County DA, this is the best you could do? That fine seems more in line with ONE poaching offense, let alone numerous others PLUS the trespassing and illegal discharges of a weapon. Hunting tags cost almost as much as his… Read more »

He must have connections somewhere!

How can this be? I can’t believe the Mono County District Attorney’s office allowed this injustice to take place. Maybe hunters will remember this when the DA comes up for re election.

NINE counts reduced to ONE ??? WTF …? 760.00 fine ??? I (unknowingly) was fishing LICENSED, on the wrong side of a sign on the upper Owens during last seasons opener, was cited by DFW and paid FIVE HUNDRED DOLLARS for ONE infraction ! I didn’t get any counts reduced… Read more »

FIVE HUNDRED DOLLARS…and I didn’t even catch a single fish !

justthefacts…So what your saying is.. Fact 1…..poaching with a bow and arrow is O.K. Fact 2…DNA results would have “set him free” Fact 3…DFW lied about their case presented Fact 4….The suspect provided info,after he was hung out to dry,therefore,should be cut some kind of break for his actions… Fact… Read more »

Low-Inyo – What I was saying was in response to Rick OB – He was saying the fine didn’t even cover the DNA testing. Fact is, no DNA testing was performed. I also didn’t say that CFW lied about their case, what I said is that the article that was… Read more »

Just — we are not “throwing stones”, as you say, since NONE OF US were caught poaching multiple deer out of season, including in residential areas. This was, in essence, egregious criminal behavior that was not punished appropriately. The fact that many people in the community have expressed their extreme… Read more »

Who the hell gave him this sweetheart plea deal?

Nothing less than a life time ban will do.There are people who have been putting in for a chance for 12 years trying to get a opportunity to take a buck like these.And for that find. Out of state hunter spend way more then 760.00 dollars for a chance to… Read more »

A slap-on-the-wrist penalty for a poacher with MULTIPLE poaching incidents….funny saying part of his “penalties” is not being allowed to hunt for 3 years….he’s been illegally hunting and poaching for years….think this is gonna stop him ? Should’ve gotten a felony,prison time,and with the felony on his rap-sheet,keeping him from… Read more »

Maybe he was hungry?

Not disagreeing that the poacher should be punished. But it is emotional desires for punitive retribution unhinged from thoughtful deliberation that has resulted in America having criminal codes that have made us the incarceration capital of the world. We need criminal justice reform, not more layering on of additional ways… Read more »

I agree with you, jail time for this would be over kill (for a first time offense), however, the punishment received is laughable. He seriously would have paid more if he’d gotten the tags (assuming he could, obviously those tags are hard to get). I think we should ask for… Read more »

Tour, I totally agree. Don’t let your “Hot Debate” score stand in your way of voicing your opinion. I’d bet half of those people never gave a minute of thought before they voted on anything.

Although overreacting is not a good thing, the penalty for his behavior should at least be more costly than doing things legally. For example, he poached deer in a premium zone, that generally takes 3-4 years to get a tag for. Beyond that, the fine is literally less than the… Read more »