Playhouse 395 is pleased to announce that they will be bringing the beloved musical Mamma Mia! to the Bishop stage this spring. A star-studded cast, lead by Maryanne Schat as Donna Sheridan and Abby Stoiber as her daughter Sophie, has been hard at work since the beginning of January learning lines and songs and dances that will transport audiences to the fictional Greek island of Kalokairi. 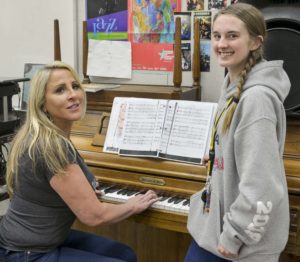 Maryanne Schat as Donna and Abby Stoiber as Sophie rehearsing for Mamma Mia!

Mamma Mia!, first performed in London in 1999, is the magical creation of an enduring story written by British playwright Catherine Johnson, based on the songs of Swedish pop/dance group ABBA. Mamma Mia! first hit the Broadway stage in 2002 where it played for 14 years. Since its London debut Mamma Mia! has delighted audiences in more than 50 countries.

Joining Schat and Stoiber on stage is a cast made up of many talented actors, both veteran and new to Playhouse. Donna’s Dynamos, Tanya and Rosie, will be played by Patricia Cook and Michelle Dossey; Donna’s ex-lovers and Sophie’s potential Dads, Sam, Bill and Harry, will be played by Chris Connolly, Layne Durocher and Jesse Steele respectively.

Sophie’s fiancé Sky will be played by Shawn Louth while his two buddies Pepper and Eddie will be played by Kenneth Zadrozney and Samuel Vichrey. Rounding out the cast are Sophie’s girlfriends, Ali and Lisa, played by Dakota Reynolds and Jeniffer Velaquez, and the marrying priest by Stan Conger. A large chorus ensemble will be joining in and playing a key important role in creating the mood and atmosphere of Donna’s Taverna and Greek island life.

Bringing it all together, with vision and style and collectively a world of experience are Director Martha Reynolds, Music Director Ryan Mills and Choreographer Sabrina Nioche. Jan Hambleton is serving as the Producer.

Playhouse 395 is a community theater group totally run and operated by volunteers ranging from the directors to the cast to the orchestra and the ushers and the those running the light and sound booths, the set designers and painters, the stage crew and the props, the costume designers and the make-up and hair artists. If you would like to volunteer and be a part of this very fun production and bringing the magic of community theater to Bishop, please call Playhouse 395 at 760-920-9100.