By News Staff on December 11, 2013 in Government Agencies/Utilities 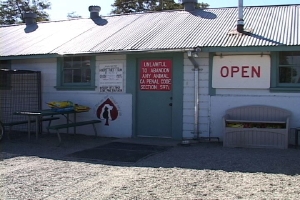 The organization of ICARE has raised $20,000 more for a new Animal Shelter project. That means available money adds up to $545,000. The Inyo Supervisors asked Deputy Public Works Director Jim Tatum to go ahead with preparation of bid requests that would include two options – one shelter with space for people and one without. Officials did re-confirm that they support Option 2, the building with space for the public and employees but want information on both options in the bid process.

Deputy Director Tatum said Option two, with space for people, would cost roughly $700,000. Option 1 with only space for animals would cost $584,000. Supervisor Jeff Griffiths said the County could start with the animals-only building and add offices and public space later. Supervisor Rick Pucci said “phasing this project scares me.” He said the County needs to pick Option 2 and go for it. He said he believes raising the extra money is doable.

Linda Arcularius favored naming both Options in the bid process as a back-up in case the County can’t raise the $700,000. ICARE President Ted Schade said the organization needs to have the Option 2 goal out there to raise donations. Schade said he thought the Board had committed to Option 2 the last time the issue came up. He said the existing Animal Shelter is “pretty awful for employees and the public, who has to sit outside on a plastic table.” He said ICARE is promoting Option 2.

County Administrator Kevin Carunchio said the County does want to move forward with Option 2 but include Option 1 in the bid process for information purposes and a fall-back position. Schade then said he saw everyone is talking the same plan. Arcularius pointed out that if the full amount can not be raised, the County would have to start over on another plan. With Option 1 in the bid process, that would offer an alternative.

The Board voted unanimously for the Public Works Department to go forward with plans and develop a bid process including both options.

The animal shelter isn’t just for animals. It needs to be suitable for the visiting public, as well as Shelter personnel. Option 1 would have the public and staff stuck in the 90-year old block cement dairy barn! This building needs to be demolished. It is not suitable for man… Read more »

I agree with you Sierra Girl, but right now the money is not there for the ideal facility. I am proposing that a quality shelter for animals be build now with the money we have, and to lease a portable building/construction trailer for office space and a customer service counter… Read more »

DT , When You and I send ICare our $50.00, they will only need 3998 more 50 dollar bills . I’m doin it… yesterday. How bout you? Lets not waste any of our hard earned valuable dollars on half steps and temporary mobile structures. This needed facility has been so… Read more »

Is seems to me the city could build a proper animals only shelter and use a portable like a construction trailer for humans until funding can be found to complete the shelter to accommodate humans.

Whichever they choose this is really awesome!