By News Staff on October 27, 2016 in Government Agencies/Utilities

Inyo County’s loss will soon be the educational field’s gain as Planning Director Josh Hart leaves his post to pursue a career in teaching. 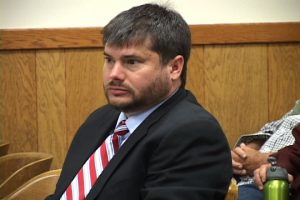 Hart has served as Inyo County Planning Director since 2010. He will continue to serve as Planning Director into the new year, and intends to assist the County in the Department’s transition to new leadership.

During his tenure with the County, Hart has helped modernize the County’s planning programs and guide the County through a maze of controversial and complicated issues, ranging from renewable energy, to various federal land management proposals impacting the local recreation-based economy, to the Tribal Consultation Policy that was adopted earlier this month and which can serve as a model for other counties around the State.

Under Hart’s leadership, the Planning Department has also undertaken numerous projects for the good of the County, including the Renewable Energy General Plan Amendment, the SolSmart program to make rooftop solar easier for households to utilize, and the current North Sierra Highway Corridor Plan. The Department is also currently focused on potential zoning issues related to medical marijuana, the Renewable Energy Transmission Initiative 2.0, and Specific Plans (tools to guide development) for Charleston View, Tecopa, and Shoshone.

In general, the Planning Department with Hart at the helm has been an invaluable resource for both the Inyo County Board of Supervisors and Planning Commission in long-range planning for the County. Hart and his staff have shown extreme dedication to and prowess in maintaining the Inyo County General Plan and coordinating planning efforts with other local, state and federal agencies which affect the County and its residents.

“Our Planning Department is among the most important facets to the County system,” said Board Chair Jeff Griffiths. “Not only do they provide critical support and services to the public, the Board, and other departments, but their expertise and thorough approach are above and beyond – and that’s due in large part to Mr. Hart, who sets the example and the expectations for his staff. He will be sorely missed, but he will be leaving behind a great team in which we have the utmost confidence.”

Hart will also be leaving with a prestigious honor to his credit. For his Department’s efforts on the Inyo Renewable Energy General Plan Amendment project, in May 2015, a “Planning Award of Merit for Innovation in Green Community Planning” was awarded to Inyo County and contractor HELIX. Both were recognized for outstanding achievement in land use planning and best practices by the American Planning Association Central Chapter.

For his part, Hart said he has enjoyed working for the people of Inyo County. He said he has been “enriched tremendously” by his experiences here and he is proud of his Department’s efforts to plan for Inyo County’s future.